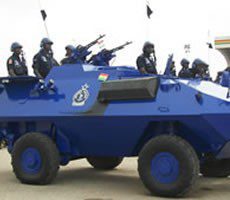 There is heavy police presence at the Okaikoi Constituency Office of the Electoral Commission here in Accra to prevent possible clashes between rival factions of the governing National Democratic Congress (NDC).

This follows disagreement over who should file nomination on the party’s ticket to contest the December parliamentary elections in the Okaikoi North constituency.

Two candidates, Andrew Okaikoi and Abdul Nasiru Abbas have filed to contest the election in the constituency but the EC on Wednesday rejected both nominations, insisting the party must determine who is eligible to stand on its ticket in that constituency.

Earlier on Thursday, Andrew Okaikoi who reportedly rejected the party’s advice to contest the Okaikoi Central seat told Joy News the EC will be in contempt of court if it allows Nasiru Abass to file nominations.

He said he has already been chosen as the candidate for that area, saying the regional executives who have been mandated by the party’s constitution to supervise such elections have already accepted his candidature.

“What has changed? Have they nullified the first elections that we went to? What is illegal about the first one [primaries] and what has become legal for me to contest another primaries?” Mr Okaikoi asked.

Meanwhile the regional and national executives of the NDC are also divided over the matter. The greater Accra regional chairman Ade Coker who backs Mr. Okaikoi insists no one can stop him from filing the nominations.

“Certain elements in the party there, for their own parochial interest, have decided to kick against this issue. We in the region feel very strongly about this that [Mr] Okaikoi should represent the Okaikoi North constituency,” he maintained.

But Abdul Abass strongly disagrees, insisting the party has paid for his nomination forms because he is the candidate they want on that ticket.