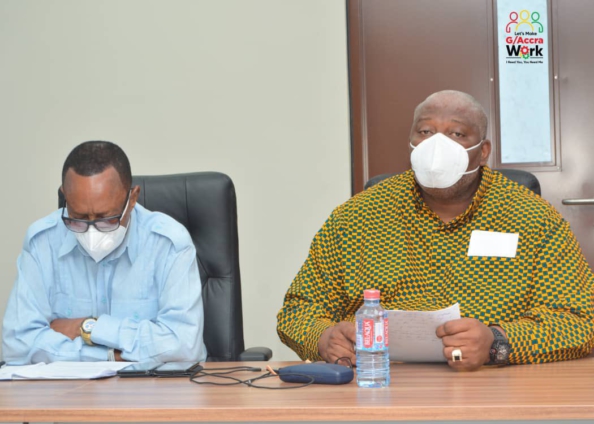 As part of the “Let’s make Accra work” agenda, Greater Accra Regional Minister Henry Quartey has engaged government officials within the capital to conclude consultations for a bye-law to enhance compliance with the Road Traffic Regulations (2012) LI 2180.

The bye-law according to the Regional Minister will ensure road regulations for motorbike riders are enforced and address the issue of abandoned vehicles on the streets.

Also, the regulation will ban tricycles also known as “Aboboyaa” from using the highways and principal streets in the capital.

The meeting was attended by the Greater Accra Parliamentary Caucus of both the NPP and NDC, Council of State Members, Representative from the Office of the Attorney General, Ghana Police Service, DVLA Transport Unions, and the Ministry of Roads and Highways.

Others include Waste Management Service Providers, GUTA, Traditional Authority, Dean of all MMDCEs and Dean of all Presiding Members.

Mr Henry Quartey since assuming office this year has embarked on an agenda to make Accra the cleanest city in West Africa.

In his quest, he has relocated onion sellers, livestock rearers and scrap dealers, and demolished the Agbogbloshie onion market.

According to him, the second and third phases of the evacuation of traders from the Agbogbloshie Market and Old Fadama will commence in October this year.

Also, he has embarked on decongestion exercises in the Ayawaso Central Municipality to rid the locality of filth and demolish unauthorised structures.

Meanwhile, government, he says will soon establish a City Response Team to assist the security agencies to enforce bye-laws in various Metropolitan and Municipal Assemblies in the region.