Hisense honours pledge to Kotoko and others with ¢160k cheque 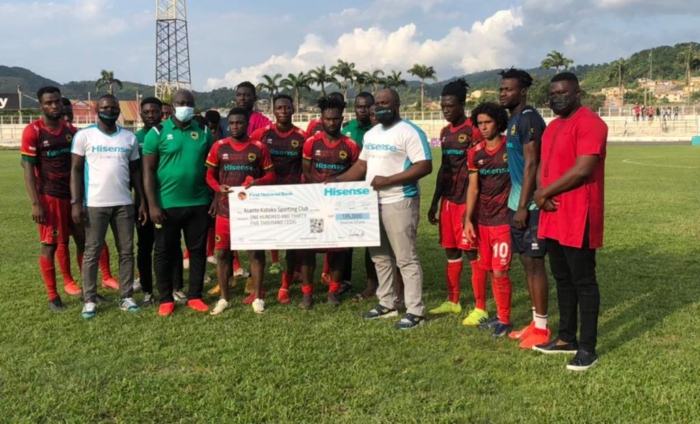 Euro 2020 key sponsor Hisense Ghana, the electronic giant, has made good on its pledge to Asante Kotoko and players who scored against the Porcupine Warriors in the just-ended Premier League.

A few days ago, Kotoko, who finished second in the 2020/21 league season, received a cheque for ¢135,000 for keeping clean sheets for 27 matches at the Len Clay Stadium in Obuasi.

On the same day, Elmina Sharks’ Faisal Mustapha took home a cheque for ¢5,000 for scoring against Kotoko in the first round.

Again, Elmina Sharks’ Tahir Mensah, who scored the winning goal against Kotoko on the final day of this season’s league, received a cheque for ¢5,000.

At the Cape Coast Stadium, Bechem United’s Steven Owusu Kaakyire received a cheque for ¢5,000 from officials of Hisense for scoring against Kotoko on matchday 33.

At the same time, Medeama’s Richard Boadu took home a cheque for ¢5,000 at the Akon Stadium in Tarkwa.

Earlier at the Accra Stadium, current league champions Hearts of Oak’s Daniel Afriyie Barnieh had his share of the reward package (¢5,000) after scoring against the Porcupine Warriors in their crucial decider totalling ¢160,000.

The reward package was instituted by the management of Hisense to promote goal scoring and a high level of competition among players in the top-flight league.

Officials of Hisense, in separate interviews after the presentations, said, “Management thought it prudent to institute this scheme to promote goal scoring, and I must admit it has paid off.”

In like manner, the recipients in separate interviews applauded Hisense Ghana for making good on its pledge.