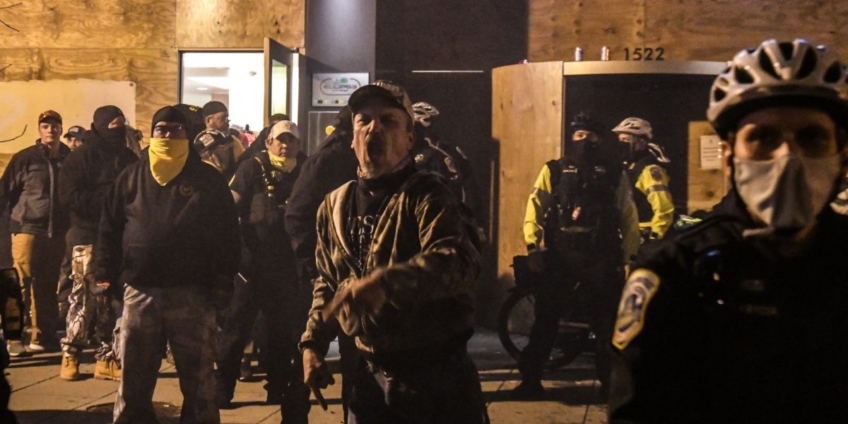 Two Black churches in Washington D.C, whose histories stretch back to the pre-civil war era, were vandalized on Saturday (Dec. 12).

The churches had “Black Lives Matter” signs torn down from their facades and burned by demonstrators in the midst of pro-Trump rallies that took place in the city.

Videos that were posted on Twitter showed people, identified by The Washington Post as members of the Proud Boys, a group classified as extremists by the FBI, and seen by others as a hate group, marching with a Black Lives Matter banner, then setting it on fire.

“Last night demonstrators who were part of the MAGA gatherings tore down our Black Lives Matter sign and literally burned it in the street,” senior pastor, the Rev. Ianther M. Mills, said in a statement to the Post.

“It pained me especially to see our name, Asbury, in flames. For me it was reminiscent of cross burnings.”

Another banner, at Washington’s Metropolitan AME Church was also torn down as a crowd shouted, “Whose streets? Our streets?” which is a familiar chant from past demonstrations against police violence. But in this case, the group destroyed the sign in front of the church.

We have not been distracted by signs, sounds, or fury for nearly two centuries. We worship. We liberate. We serve. https://t.co/DImtskWSyx

“We have not been distracted by signs, sounds, or fury for nearly two centuries. We worship. We liberate. We serve,” said Metropolitan’s pastor William H. Lamar IV through a post on Twitter.

Washington D.C. Metropolitan police declined to say if there were arrests from those particular incidents, but that they are investigating them. Police, however, did arrest almost three dozen of the protestors with charges of misdemeanor assault, the Post reported.

“We take these offenses seriously and we are currently investigating them as possible hate crimes,” spokeswoman Alaina Gertz told the Post.

Demonstrators had come to Washington to protest the results of the 2020 presidential election, refusing to accept that Donald Trump lost to President-elect Joe Biden.

Mayor Muriel Bowser said the city’s Office of Religious Affairs along with Metro police were in contact with the churches.

Vandalism against Black churches has been a consistent reality over the course of generations. In the south, a rash of church burnings and destruction has taken place over the past decade. Last month, a Louisiana man, Holden Matthews, was sentenced to 25 years in prison for the burnings of three Black churches there. Earlier in December, four juveniles were arrested for vandalising a historic Black church in Missouri.