Mr Leung offered the talks late on Thursday, responding to a deadline.

Protesters have been occupying parts of the city for several days. They are angry at China's plan to vet candidates for elections in 2017.

Beijing has thrown its full support behind Mr Leung, calling the protests illegal and "doomed to fail".

Protest numbers have been swelling at night and falling during the day. On Friday morning, smaller groups remained on the streets.

Late on Thursday, shortly before a deadline set by protesters for his resignation, Mr Leung said his government would hold talks with student leaders.

"I will not resign because I have to continue with the work for elections," he said, adding that any attempts by protesters to occupy buildings would lead to "serious consequences".

Protesters – a mixture of students, supporters of the Occupy Central democracy movement and others – have been blockading three areas of Hong Kong, including the Central business district, since Sunday.

They had threatened to seize buildings, but now say they will join the government talks.

The Hong Kong Federation of Students (HKFS) said it would have a public meeting with Ms Lam, but insisted that Mr Leung should step down, saying he had "lost his integrity".

Occupy Central, meanwhile, issued a statement saying it hoped "the talks can provide a turning point in the current political stalemate".

But it also called for Mr Leung's resignation, saying he was "the one responsible for the stalemate". 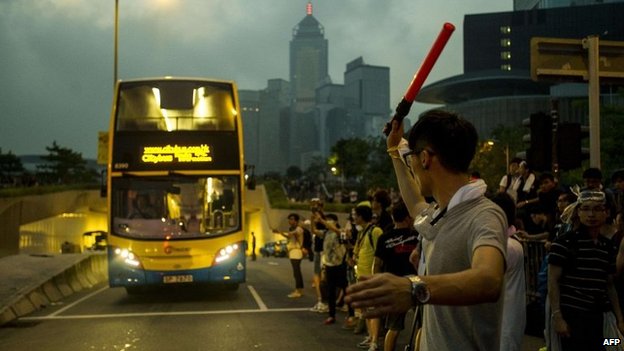 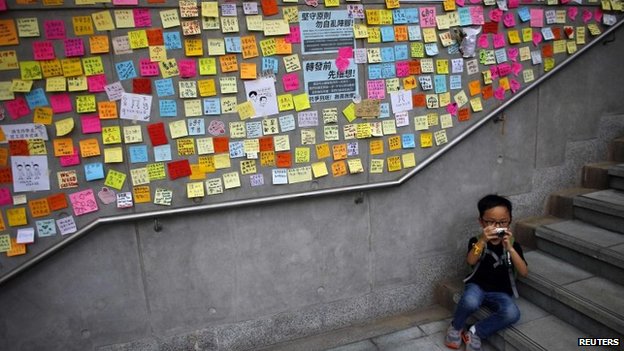 Protesters have covered the wall of this government building with messages

At the heart of the row is how Hong Kong elects its next leader. In August, Beijing ruled that while Hong Kong residents would have a vote, their choice of candidates would be restricted by a committee.

The protesters say this falls short of the free elections they are seeking.

These protests are being seen as a major challenge to Beijing's rule. Senior Chinese leaders have described them as illegal.

Communist Party mouthpiece People's Daily, in its latest piece, said Beijing's ruling in August was "the necessary decision, and the only decision".

Reports citing Hong Kong government sources suggest officials plan to wait the protesters out and hope their campaign loses steam, after witnessing how the police use of tear gas at the weekend brought more people out.

Writing in the South China Morning Post, Hong Kong's last British governor before the territory was handed back to China in 1997, Chris Patten, said that transparent consultations were the way forward now.

"Under the existing plans, there is supposed to be a second phase of consultations on democratic development to follow what turned out to be a counterfeit start to the process," he wrote.

"Hong Kong's government should now offer its people a proper second round of consultation, one that is open and honest.

"Dialogue is the only sensible way forward. Hong Kong's citizens are not irresponsible or unreasonable. A decent compromise that allows for elections that people can recognise as fair, not fixed, is surely available."