How housework can hurt a relationship 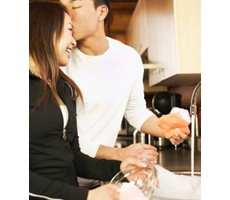 If a couple doesn’t split household chores fairly, it can add strain — especially for women, a Swedish study shows.

But the problem goes beyond the list of chores. It’s not so much about who does what, as it is about equality within the relationship.

The researchers, based at Sweden’s Umea University, studied questionnaires filled out by 723 residents of a mid-sized Swedish industrial town from 1981 to 2007. The questionnaires covered school, work, socioeconomic conditions, and health at ages 21 and 42.

At age 21, both men and women reported roughly the same level of psychological distress (which included restlessness, concentration problems, and anxiety). By age 42, however, women’s levels of distress had gone up while the men’s had stayed the same.
Feeling Undervalued Leads to Feeling Distressed

For women, a key contributor to that rise in distress was the uneven distribution of domestic work. But there was more to it than that. It all came down to whether the women felt they and their partners were equals.

If women felt a sense of gender inequality in the relationship, they were highly likely to be distressed. But if they reported that they were on an equal footing with their spouse or partner, the risk of distress disappeared, even if they did more than their fair share of the housework.

“The results of this study indicate that it is not only a matter of whether the responsibility for domestic work is equal or not, but also the relational context in which the responsibilities are divided within the couple relationship,” the authors write.

Psychologist Jill Weber, PhD, was not involved in the study — and she’s not surprised by the findings.

“It is not the work per se,” says Weber, who has a private practice in the Washington, D.C., suburbs. “It’s the feeling that the woman is not getting support from her partner. Inequality often translates as a lack of emotional support.”

Men in the study were less likely than women to report that gender equality was an issue in their relationships. For them, the notable cause of distress was being in a lower socioeconomic position than their partners. To Weber, this too makes sense.

“In general, men who earn less than their wives or who are out of work don’t feel respected, and respect is a hot-button issue for men,” says Weber, author of the forthcoming book Sex & Intimacy. “And men often have some shame that makes it hard for them to open up about their feelings about this perceived lack of respect.”

Weber says it is easy for couples to fall into such dysfunctional, distress-building patterns, which they often live with for many years. She says it’s important for couples to both recognize and talk about the causes of their distress.

“Getting into dysfunctional patterns is unavoidable at times,” she says. “Couples who notice these patterns and have conversations about them and how to get out of them do better over time. It’s the couples who deny that they have a problem who do poorly.”

Family psychiatrist Alan Manevitz, MD, says the study’s results are neither unexpected nor earth shattering. Like Weber, Manevitz says that psychological distress results less from an unequal division of household labor and more from a perceived lack of respect and appreciation in a relationship. And, he points out that if any distress does exist, it will spread.

“One partner’s unhappiness will lead to stress in the whole family,” says Manevitz, who practices at Lenox Hill Hospital in New York. “What matters most is that couples agree and have the same vision about how to divide things up, and that that vision evolves and has flexibility.

The kind of equal teamwork that marks successful couples — “If they have it, they’re usually not seeing me,” says Manevitz — makes for happier marriages and teaches a couple’s children important lessons.

“Parents should be role models of communication and mutual respect,” Manevitz says. “Their children should see them sharing tasks and making decisions as equals.”