How world leaders were bused to Queen Elizabeth’s funeral today 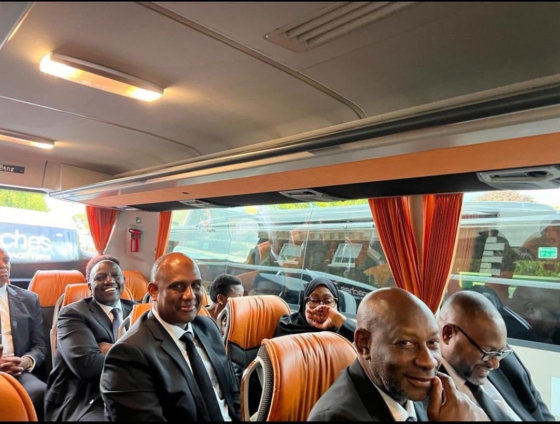 The funeral service for the late Queen Elizabeth II is being held today in the United Kingdom.

The landmark event at the Westminster Abbey in London has seen numerous leaders from around the world arrive at the invitation of King Charles III.

In an interesting turn, however, all heads of state and royals were billed to appear at the Westminster Abbey via a bus with the exception of the US president, Joe Biden who was driven in his official vehicle, ‘The Beast’.

Though this move raised some eyebrows, it was followed through.

These leaders are there to commiserate with the British people and pay their last respects to the former head of the Commonwealth.

The queen died on Thursday, September 8 at age 96.

Some of the images that have popped up so far include a coach full of African leaders including the Kenyan President, William Ruto and President of Tanzania, President Samia Suluhu.

President Ruto and other world leaders arrive in a bus at Buckingham Palace in the UK to attend a state reception in honor of Queen Elizabeth II.
📷 Courtesy pic.twitter.com/8c32cmof7Z

Below are more visuals from the ceremony.

The King, the Prince of Wales, the Duke of Sussex and Peter Phillips have arrived at Westminster Hall to witness The Queen’s coffin be moved by the bearer party. pic.twitter.com/uwNFnQCqgk

Prime Ministers of the Realm arrive at The Queen’s State Funeral. pic.twitter.com/xuiaPb72gj

The busses pulled up, and the world leaders flocked inside Buckingham Palace.

Queues, busses and royalty – it is all so very British. pic.twitter.com/raUQNAAcHX

DISCLAIMER: The Views, Comments, Opinions, Contributions and Statements made by Readers and Contributors on this platform do not necessarily represent the views or policy of Multimedia Group Limited.
Tags:
Funeral
Queen Elizabeth II
World leaders