One of the longest cross-border drugs-smuggling tunnels between Mexico and the US has been found by authorities in San Diego, American officials say.

They say the 800m (874 yards) tunnel was used to transport an "unprecedented cache" of cocaine and marijuana.

It was the 13th sophisticated secret tunnel found along California's border with Mexico since 2006.

But a local official described it as "ingenious" and unlike anything seen before.

Three have been found on the same short street in San Diego that runs parallel to a border fence with Mexico.

In the latest incident about 1,016kg (2,242lb) of cocaine and 6,350kg of marijuana suspected of being transported through the tunnel was seized, officials say. 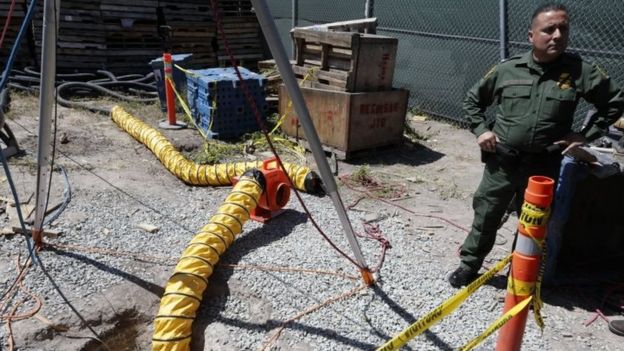 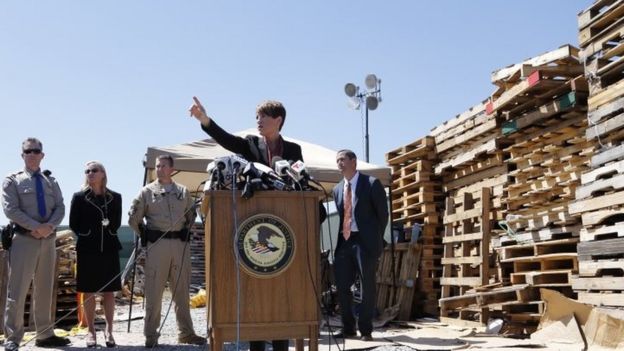 "This is the largest cocaine seizure ever associated with a tunnel," Southern California District Attorney Laura Duffy said, and is the second "super tunnel" to be discovered in recent weeks,

In March, authorities uncovered a 380m tunnel that ran from a restaurant in Mexico to a house in California.

The latest tunnel ran at a depth of 14m (46ft) from the bottom of an elevator shaft built into a house in Tijuana to a hole in the ground on the American side enclosed within a fenced-in lot set up as a pallet business. 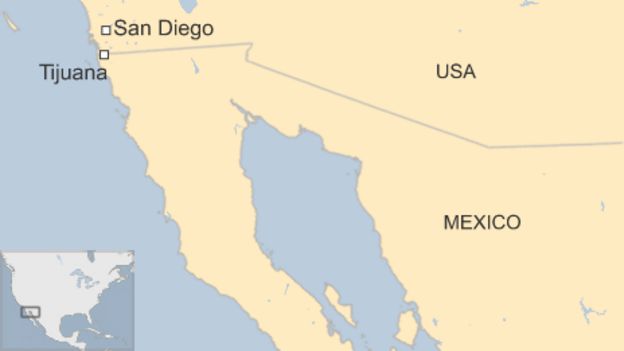 The hole was hidden under a trailer-sized rubbish bin that smugglers used to move the drugs from the lot, federal officials said.

"They put the drugs in the dumpster and then hauled the dumpster to another location to unload it," Ms Duffy said.

Federal agents followed a truck that took the bin to a central San Diego location about 40km (25 miles) north of the border and witnessed the cargo being loaded onto a box truck, which drove away. 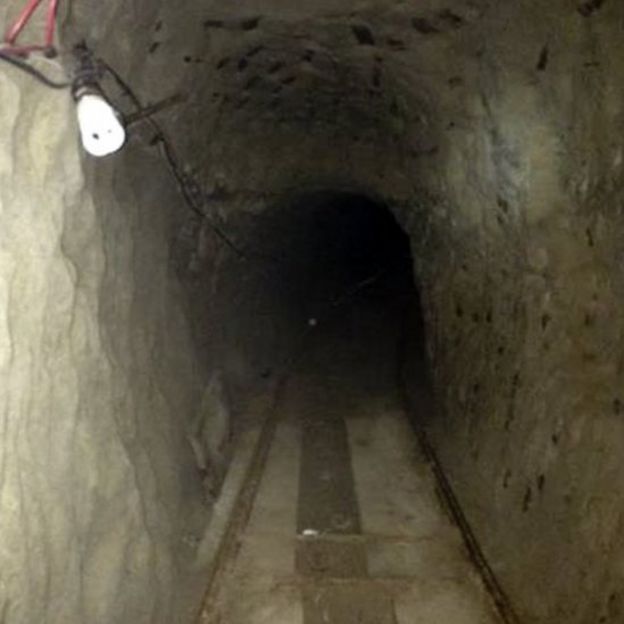 San Diego County sheriff's deputies then stopped the truck and seized the drugs, arresting three men in the process.

The tunnel used in the operation was sophisticated, The Los Angeles Timesreported, and had a ventilation system and lighting. On the Tijuana side, the tunnel was connected to an elevator that ascended into the house.

"I think it fair to say that few would suspect that traffickers were moving multi-ton quantities of cocaine and marijuana in this very unassuming way, in full view of the world around them," the paper quoted Ms Duffy as saying.

"It's a rabbit hole,'' she said of the latest tunnel to be found.

"Just the whole way that it comes up right out into the open is a bit ingenious. It's something completely different than what we've seen before."