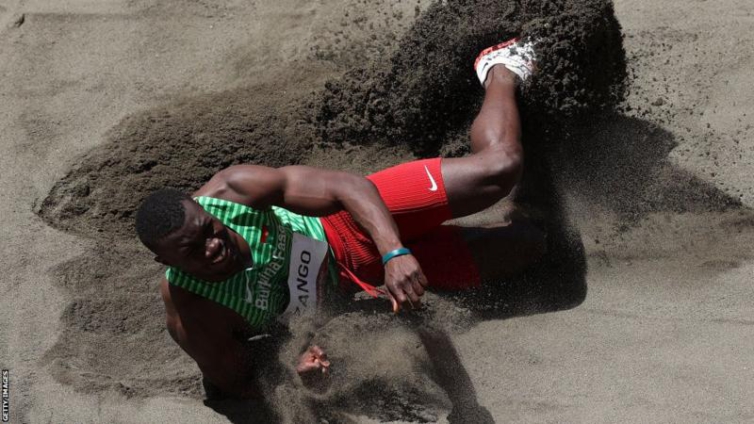 Triple jumper Hugues Fabrice Zango has been making history for himself and Burkina Faso throughout 2021.

The 28-year-old began the year by becoming the first man ever to jump over 18 metres indoors, he followed that up with a new African record outdoors.

Zango, who combines his athletics with studying for Ph.D. in electrical engineering, will now be returning home for the first time in 18 months as Burkina Faso’s first-ever Olympic medallist.

“I am happy for the first every medal for my country but I am pretty sad because I was not able to put in a good performance,” he told BBC Sport Africa.

“What makes me sad is that all season I was able to produce some good performance regularly but at these Olympics things were really hard for me I don’t know why.

“I was really good physically and mentally I didn’t feel any pressure in particular pressure but I really don’t know what happened.

“We will take a little time to analyse what happened in these Olympics to find a solution for the next challenge.”

He says that he is looking forward to being back in Burkina Faso to celebrate his achievements.

“I think the sadness will go away when I will go home I think that when the people will celebrate the medal and something like that I will forget the pain yes,” he added.

“So it will be great when I will go back to Burkina Faso next week. Everybody is happy in Burkina Faso and nobody slept last (Thursday) night because everybody was in front of their screens to watch the final.”

“It is big thing for them because Burkina Faso now realise what the Olympics mean, what I did will inspire some youngsters.”

Among those to have congratulated him on his medal was the country’s president Roch Marc Kabore.

“I have just had a telephone conversation with our big champion Hugues Fabrice Zango with his dazzling bronze medal from the Tokyo Olympics,” the president posted on social media.

“I told him face to face just how proud the entire population of Burkina Faso are of his achievements. Bravo champion.”

Zango is already planning ahead as he pushed for success in athletics and in his academic endeavours.

“From now the challenge is to finish the season with some Diamond League meetings at the end of the season,” he added.

“I will take a big rest because Olympics makes the mind tired. Next July I will finish Ph.D. and I will be full-time athlete.

“I have many things to do to improve again and now I am able to jump 17.80 something like that, so in order to get to another level, I have to work hard on some points.

“I haven’t been able to work on everything because I didn’t have a lot of time you see so, maybe with Ph.D. in my pocket I will try to be more professional in athletics.”