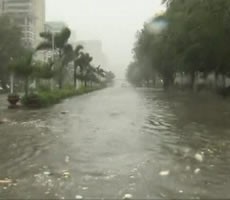 Hundreds of people are feared dead in the Philippines after Typhoon Haiyan swept through on Friday.

Among the worst hit areas were the eastern island of Leyte and the coastal city of Tacloban, which saw buildings flattened in a storm surge.

First reports said 100 bodies had been found there but the Red Cross later estimated a figure of more than 1,000, with 200 more deaths in Samar province.

Hundreds of thousands of people are reported displaced from their homes.

Typhoon Haiyan – one of the most powerful storms on record to make landfall – is now bearing down on Vietnam, where tens of thousands are being evacuated.

The BBC Weather Centre says the typhoon is expected to make landfall on Sunday afternoon local time (between 03:00 and 09:00 GMT), although it will have decreased markedly in strength.

The latest report from the Philippines' Disaster Risk Reduction and Management Council confirmed 138 deaths as of 10:00 GMT on Saturday. It said almost 350,000 people had been reported displaced.

The Philippines' Energy Secretary Jericho Petilla flew to Leyte by helicopter and viewed the devastated fishing town of Palo.

He said he believed "hundreds" of people had died just in that area.

Gwendolyn Pang, secretary general of the Philippine Red Cross, said it had received preliminary reports by Red Cross teams in Tacloban and Samar.

She told Reuters news agency the teams had estimated "more than 1,000 bodies floating in Tacloban".

"In Samar, about 200 deaths. Validation is ongoing," she said.

Video from Tacloban showed it engulfed by a storm surge.

One resident, Sandy Torotoro, told Associated Press he was swept away when his house was ripped from its moorings.

"When we were being swept by the water, many people were floating and raising their hands and yelling for help. But what can we do? We also needed to be helped," he said.

Interior Secretary Mar Roxas said after landing in Tacloban: "The devastation is, I don't have the words for it… It's really horrific. It's a great human tragedy."

The airport has been badly damaged and only military flights are able to operate, the BBC's Jon Donnison reports from Manila.

John Andrews, deputy head of the Civil Aviation Authority, said he had been told of more than 100 bodies around Tacloban airport, with at least 100 more people injured.

Airport manager Efren Nagrama said: "It was like a tsunami. We escaped through the windows and I held on to a pole for about an hour as rain, seawater and wind swept through the airport. Some of my staff survived by clinging to trees."

Local TV journalists said they had seen 20 bodies in a church in Palo, 10km (six miles) south of Tacloban.

Sebastian Rhodes Stampa, head of a UN disaster assessment co-ordination team, said there was "destruction on a massive scale" in Tacloban.

"There are cars thrown like tumbleweed and the streets are strewn with debris. The last time I saw something of this scale was in the aftermath of the [2004] Indian Ocean tsunami."

Communications to some of the worst-hit areas were cut off when the storm hit and it may be days before the final death toll and the full extent of the damage is known.

Some 15,000 troops have been deployed to the disaster zones. However, rescuers are struggling to get to remote areas, hampered by debris and damaged roads.

There were reports of looting from at least one department store in Tacloban.

As darkness fell on Saturday, many areas were without electricity.

Jim Pe, deputy mayor of Coron town on the island of Busuanga, said most houses and buildings there had been destroyed or damaged.

Speaking by phone, he said five people drowned in the storm surge and three others were missing.

The eye of the storm – known locally as Yolanda – passed well to the south of the capital Manila, but the city still felt its force.

In the typhoon's path were areas already struggling to recover from a deadly 7.3-magnitude earthquake last month, including the island of Bohol, where about 5,000 people are still living in tents.

Britain's ambassador to the Philippines, Asif Ahmad, said on Saturday that a team of humanitarian experts would be sent by the UK "to assess needs and then mobilise resources".

The head of the EU's delegation to the Philippines, Guy Ledoux, had earlier told local media that the EU was also sending a humanitarian aid team.

The typhoon is now heading for Vietnam. The BBC Weather Centre says sustained wind speeds at landfall are currently forecast to be in the region of 75-80 mph (120-130 km/h), with gusts up to 115 mph.

Authorities there have begun the mass evacuation of more than 200,000 people.

State media report that schools are being closed and people living in low-lying coastal areas are being moved to typhoon shelters on higher ground. Shipping has also been ordered back to port.

Some 170,000 soldiers have been mobilised to provide emergency relief.

Michael Annear, Red Cross representative for Vietnam, told AFP: "Typhoon Haiyan is two or three times more powerful… We're expecting a lot of wind damage… especially for those who repaired their houses themselves after Wutip and Nari."