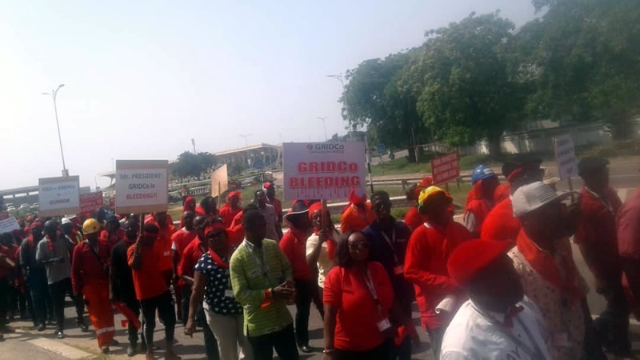 The agitated staff of GRIDCo massed up at the Black Star Square on Tuesday to begin the protest march to the Finance Ministry and the Electricity Company of Ghana (ECG).

GRIDCO leadership has been pushing for millions of debts owed it by ECG, the Northern Electricity Distribution Company (NEDCo) and the Volta Aluminum Company (VALCo) to be settled.

National Chairman of Staff Group of GRIDCo, Raphael Kornor, said at a press conference recently that the unavailability of funds to the company had forced it into rationing fuels for their staff’s travel for maintenance works while hoteliers have refused to make their facilities available to staff who travel for work due to their indebtedness.

He added that government had also not paid some GH¢250 million requested by the management of GRIDCo while it took steps to raise bonds to settle the legacy debt in the energy sector although the president had directed the Ministry of Finance to release the money.

“The first Energy Sector Levy Act bond which was raised by this present government in 2017/2018, our sister company, the VRA had over $550 million to settle their indebtedness with the banks but not a dime was given to GRIDCo to offset the ECG and VALCO indebtedness to us,” Mr Kornor lamented.

He, therefore, called on the government to as a matter of urgency settle the ECG and VALCO indebtedness to GRIDCo which he says has stalled some new projects being undertaken by the company.

Mr Kornor said if the government failed to settle the debts, then they would be left with no choice but to embark on industrial action, beginning with treating all emergency works as normal work within the normal working hours.

The association said if by close of work on December 4, the debts were not cleared, they would embark on a sit down strike and impress upon their management to cut power supply to all customers which are indebted to it.

DISCLAIMER: The Views, Comments, Opinions, Contributions and Statements made by Readers and Contributors on this platform do not necessarily represent the views or policy of Multimedia Group Limited.
Tags:
Black Star Square
ECG
GRIDCo