Hundreds slug it out at Joy FM Hi-life Dance Party 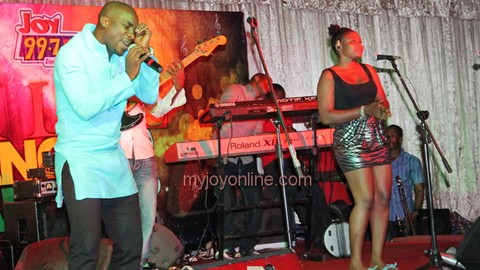 There was virtually no space on the dancing floor as patrons of Joy FM’s Hi-Life Dance Party danced their hearts away to good music at the Events Haven of the Ghana International Trade Fair Center, La.

It was definitely a night of good music especially for music lovers who probably were fed-up with the usual miming on stage by the current crop of Ghanaian artistes. And when you’ve got George Darko, Paapa Yankson, Kwabena Kwabena and Felix Owusu on the bill, you can certainly be guaranteed of an unusual night. And it was.

The tone for the party was set by Felix Owusu who warmed the crowd to some of his classic tunes which were hits back in the ’80s and ’90s. Clearly, his track “First Fool” was the audience’s favorite as they virtually took over the mic from him not only to sing but dance as if tomorrow never existed.

Soon it was time for a rhythm shift, the Burger Hi-life gave way to contemporary Hi-Life and there was no other artiste than Kwabena Kwabena to quench the thirst of the audience. The Asor singer just did that. From one hit to the other; but it was his track Bibini ba that unlocked the waists of the audience; it was all a lovey-dovey affair for couples to the envy of patrons who came single.

George Darko, highly credited as the originator of Burger Hi-Life with his track Akoo ti brofo was also fantastic on the night. The Tufuhene of the Akropong-Akuapim gave the audience more than they could have hoped for. His performance throughout the night creating an alluring calm atmosphere and for the moment gave everyone an escape route from the tension building because of the December 7 polls.

But it was Paapa Yankson, who saved the best for the last, giving credence to the saying that the best indeed comes from the west. The Okukuseku man, just like wine, gets better with age. The 68-year old, full of energy, backed by the Shatter Band was on point. Somehow his classic tunes such as Show your Love, Tena Mekyen among others are as popular as they were in the ’80s and so was his performance. Such a class!

And when MC for the night Citizen Attoh signaled the end of the show, two sets of audience moved out; first it was those that were disappointed because they wanted more of the same and of course those that got served the value for their money or even more. Be that as it may, the 2012 Joy FM Hi-Life Dance Party was fulfilling!