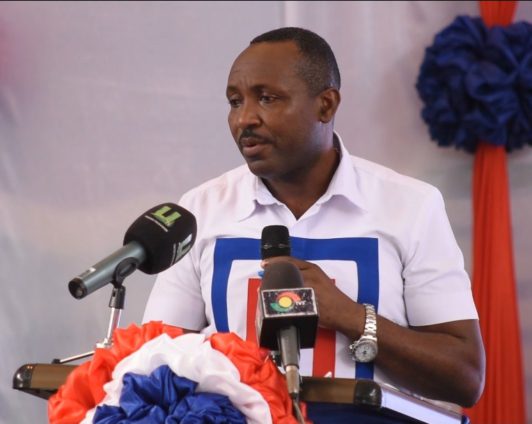 Former General Secretary of the New Patriotic Party (NPP), John Boadu, has said that though defeated in the NPP race, he is assisting the party to break the eight.

In an interview on JoyNews’ The Probe on Sunday, John Boadu asserted that his support is also to ensure that the management of the party does not suffer.

“You know election is a process so there are a lot of things that need to be done and I am doing a lot of things behind the scenes because I started a lot of processes that will have to be continued and we need to follow up,” he stated.

“Just about a month or two ago, the national officers had an orientation and I was invited to take them through the organogram of the party and I did so to their admiration,” he added.

According to him, he is still committed to the NPP even if he holds no official position.

In a related development, John Boadu, says he blames himself for losing his position after the party’s National Delegate Conference.

Speaking for the first time since his defeat, he admitted that his desire for the party’s interest prevented him from being selfish to utter certain words against his opponent which could have won him the elections.

“I would say that it is because of the larger interest of the party that is why I also did not say certain things that would have explained to people why we got where we were and where we are coming from.

“(I blame it) on myself and the difficulty we are in as a party in government and I am happy about it because it is better to happen that way than to be selfish and come out to say the kind of things I could have said like what happened to the NDC,” he told Emefa Apawu.

Responding to the question of whether his opponent was unfair to him, he said “I will not blame him, he also strategised just also listening to what people are saying and just promised them that.”

Mr. Boadu noted that although the current General Secretary of the party, Justin Frimpong Kodua was not a very close friend prior to contesting the elections, his relationship with him is a very “official” one.

DISCLAIMER: The Views, Comments, Opinions, Contributions and Statements made by Readers and Contributors on this platform do not necessarily represent the views or policy of Multimedia Group Limited.
Tags:
John Boadu
NPP