I am not pregnant for Elikem – Theresa Onnen reacts 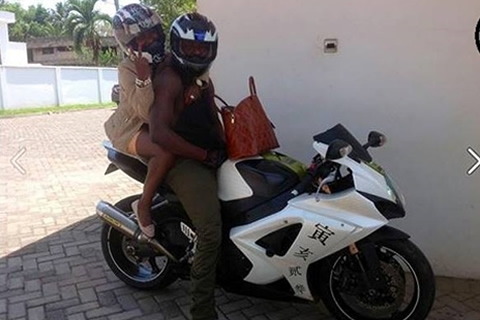 Theresa Onnen, the lady at the centre of an alleged relationship involving Big Brother Africa star, Elikem Kumordzi has denied the existence of such a relationship.

Ghanaian newspaper, Graphic Showbiz, in its Monday edition reported that Elikem and his girl friend Pokello Nare have broken up and that the former Big Brother star  is now dating a 28-year-old fashion designer, Theresa Boateng (Onnen), who came from Germany a month ago to outdoor her clothing line in Accra.

The newspaper stated that Elikem and Theresa have confirmed their month old relationship and Miss Boateng is even two weeks pregnant for Elikem.

Theresa reacting to the allegations in an interview with Myjoyonline.com denied being pregnant for Elikem stating that the relationship she has with Elikem is strictly business.

"I'm not pregnant," she said, adding that she met both Elikem and Pokello through a friend just some weeks ago because of her clothing line launch in Ghana.

"Right now he is a business partner first and a good friend," and "I'm not pregnant period," Theresa refuted.

According to her, she did not grant Graphic Showbiz any interview with respect to the said relationship disclosing that she has spoken to her lawyers and the paper will fix the problem caused by the publication.

Elikem on the other hand told Myjoyonline.com in an interview that, "Of course I know Theresa Onnen. Theresa is a German fashion designer who came to Ghana trying to promote her brand."

"I stitched the designs for her and she had her first fashion show at the Royal Richester Hotel," the Ghanaian designer said and added that, Pokello, Funny Face, Kwaw Kese were among the list of celebrities who modeled for Theresa.

According to him, "Theresa wanted to do another fashion show for her Chinese investors" at M Plaza "we became sought of like business partners…because she trusts my work, she wants to work with me."

Elikem alleged that, "Someone is controlling [Theresa's] Facebook account put up pictures to say 'Elikem is my baby' because we took a couple of pictures together."

Reacting to pictures of himself and Theresa spending time together, the Big Brother star explained he gave her a lift on his motorbike because there was traffic in town and they needed to meet up with a business partner.

Elikem stressed that he did not grant the Graphic Showbiz any interview concerning the matter.