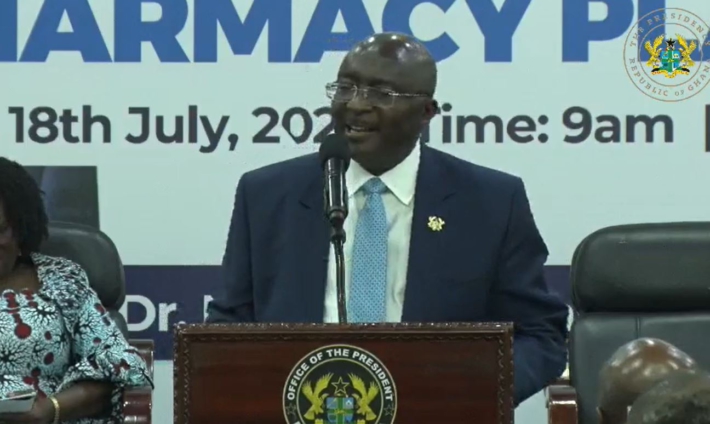 Vice-President, Dr. Mahamudu Bawumia has responded to critics who recently attacked him for saying that he will choose the Ghana card over infrastructural projects if he has to.

Dr. Bawumia said he is unfazed by the criticism because they smack of an ‘impossible mindset’.

Speaking at the launch of the E-pharmacy platform on Monday, he noted that the many successes chalked in digitalization efforts “is why I [Dr. Mahamudu Bawumia] enjoy proving the skeptics wrong all the time.”

“Unfortunately for people of government who try to move our country to a different level, they are confronted with mindset that only sees impossibility. A mindset that refuses to believe that African countries like Ghana can lead the world in the implementation of digital technology,” he said.

The Vice-President also listed many successes with the digitization drive, including the Ghana card as a travel document.

“People could not understand how the Ghana card, certified by ICAO, could be used as travel document and they mocked the idea. But today, it is a reality…when we said that we will bring the mobile money interoperability, every adult Ghanaian will be able to have a bank account. They did not quite get it

“Today with the mobile money interoperability, 90 percent of adult Ghanaians at least have either a mobile money account or a bank account and the two are interoperable. Ghana currently has the fastest growing mobile money market in Africa with transactions last year totaling close to one trillion,” he noted.

On Friday, July 14, Vice President, Dr. Mahamudu Bawumia, declared his choice for the Ghana card over road interchanges in the country’s quest for development.

According to the Chairman of the Economic Management Team, the national identity card, also known as Ghana Card, is more beneficial than the numerous interchanges constructed across the country.

“But if you gave me 1,000 interchanges and a Ghana Card, I will choose the Ghana Card because it is more impactful,” he said on Thursday.

But the Deputy General Secretary of the opposition National Democratic Congress (NDC), Peter Otokunor poked fun at Dr. Mahamudu Bawumia for his comments about the Ghana card.

During the New Patriotic Party’s National Delegates Conference held at the Accra Sports Stadium on Saturday, Peter Otokunor mocked the Vice-President that he bought kenkey with his Ghana card while on his way to the Conference.

“When we were coming, I decided to buy a ball of kenkey. This ball of kenkey sells for 5 cedis. The leaves on the kenkey alone is 3 cedis more expensive than the kenkey itself, and guess what? Ladies and gentlemen, I bought the kenkey with my Ghana card,” he said amid laughter.