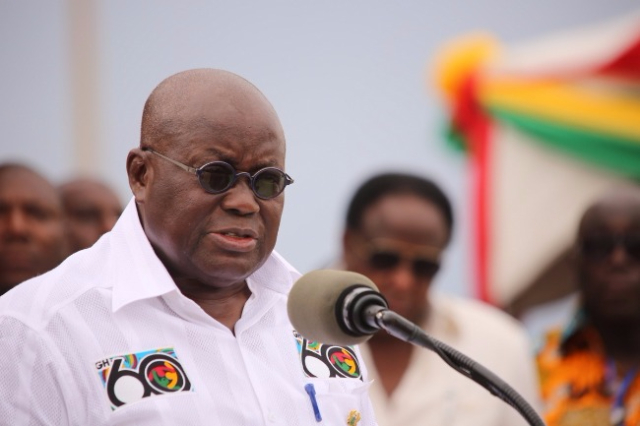 The president, Nana Akufo-Addo has put his presidency on the line with a commitment to end the illegal small scale mining popularly called galamsey in Ghana.

Rallying Ghana’s traditional leaders together the president, said if there is one right thing to be done, that thing is for all to fight galamsey, reclaim the lands and leave for posterity a “green country” and a “clean space.”

Ghana’s future is in a limbo with a huge chunk of its environment under-siege from boisterous young men and women who are digging every inch of space in mineral rich areas of Ghana in search of gold, diamond etc.

They have polluted many rivers, cut down many trees, destroyed many farms all in search of gold.

These miners are mostly funded by influential kingpins. Their activities are threatening the very survival of the country, leaving the government no choice but to declare war on galamsey.

In furtherance of this war, some miners have been arrested, excavators have been seized all in a desperate move to end the canker.

On a day that had powerful chiefs all converging for the anti-galamsey forum, the president couldn’t have made his intent for the galamsey fight any clearer than vowing to stop it even if galamsey voters vow to turn against his government.

While he understands that the difficult economic situations in the country sometimes drive people to all length just to survive, he said the country cannot sit aloof when its heritage is being plundered.

"We all know that we have been in difficult times and times like these there is need to keep body and soul together. Every man has a duty to provide for the family and sometimes use every means possible.

"But there are things we can’t just allow to happen and one of them is the abuse of our heritage," he reminded.

He said the lands, the rivers and the entire Ghanaian space are the country’s heritage and the country has a duty to protect it for posterity.

The president is convinced that the galamsey tragedy is perpetrated by a network of politicians, business men and “I dare say, nananom.”

He said so dire is the situation that Ghana’s neighbors are now complaining of foul river bodies as a result of galamsey activities in Ghana.

He narrated what he described as an embarrassing spectacle when the Ivorian president, in a recent conference attended by Ghanaian Minister of Environment Prof Frimpong Boateng, complained about how Ivorian rivers are beginning to be desecrated as a result of the galamsey activities in Ghana.

“Rivers, waters, forests don’t know national boundaries; they run across nations. The activities of Ghanaian illegal miners are jeorpardising the space of our neighbours,” he said.

“Rivers that have been with us for centuries are drying up..” he said, adding it is time to end this debacle.

“It will be a betrayal of the trust imposed on me if I fail to end this,” he stated but was quick to point out that his commitment alone will not be enough to solve the canker.

For an institution that was vociferous in fighting the colonial masters for Ghana’s lands which had been taken over by the British, President Nana Akufo-Addo, said the chiefs and traditional leaders once again must write their names in gold by joining the fight against galamsey.

He said even though he has great allies in government, the war against galamsey cannot be won without the influence of the chiefs.

“We cannot win this fight without the traditional support of chiefs” he said, adding, for any serious project, if you are not involved it doesn’t happen.

He said the government is designing a policy, a package designed to stop galamsey, reclaim the land, and provide alternative jobs for the youth.