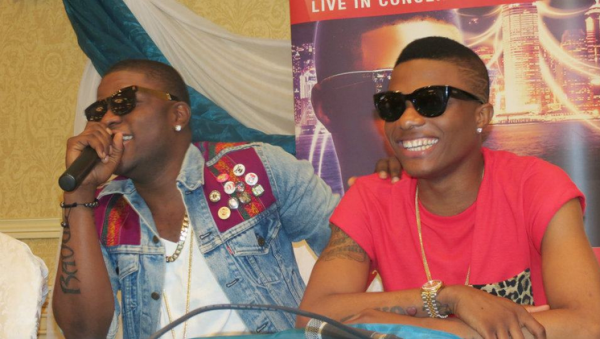 Speaking on Multi TV's 'Let's Talk Entertainment', Skales said: "That's one of the mistakes I made and I feel like I'm growing in the eyes of the public so definitely, I know that you can never benefit from things like that. So I've become a better person now, I'm more grown now, I've realized that I'm a role model, a lot of people look up to me and so there's some mistakes I cannot do".

Skales recently accused Wizkid of allegedly stealing his hit song 'Azonto' and claiming that he wrote the lyrics of Wizkid's 'Superstar' song.

Wizkid responded in a series of tweets saying it was just a public stunt by Skales to promote his new song 'Je Kan Mo'. The controversy raged on for a while between the two.

Regretful Skales who says the issue has been resolved said, "I'm a human being, I must make mistakes and the only way is if I correct myself and make myself a better person".

He however warned that he will come after anyone who steals his song saying, " if you steal my lyrics, I'm coming for you.

For now nobody has stolen my lyrics because I only play my music to my team if I want to play to other people to hear, I can put it on snap chat".

On protecting his songs, Skales said, "this is your exclusive material and you don't want it to be out yet so just let it be between your team so you that if it gets out you hold your team responsible for it but for now, protect it like it's your life".

Skales also debunked speculations by some entertainment pundits that the Nigerian media do not support works by Ghanaian musician.

Skales stressed that, " The Tonga beat is raining in Nigeria, everybody dey do that kind song. They call it Tonga beat".

The musician, who is owner of OHK record label but not signed onto it says, it is a business move because the label is not performing well like the one he his signed unto.

"I had to sign to Baseline Records because I had bigger plans and things I wanted to do but OHK is still going on, because I own it with a couple of friends of mine so for now, every one of my project is signed under baseline.