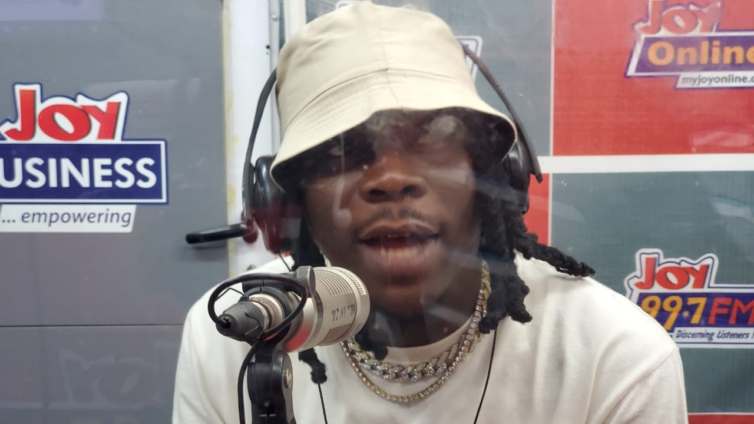 Dancehall artiste Stonebwoy says he was amazed when he found out that he had ¢2,000 as royalties with the Ghana Music Rights Organization (GHAMRO).

Speaking to Andy Dosty on Daybreak Hitz on Tuesday, the ‘Sobolo’ hitmaker who is currently in the United Kingdom said narrated what happened when he visited the Organisation.

He said his curiosity over how the GHAMRO system works pushed him to visit them.

“I didn’t go to GHAMRO to say that ‘hey I’m here, give me all my money you owe me’. This subject has become the artist against the GHAMRO issue, and I wouldn’t be the first or last artiste to raise it; we will continue to raise the issue.

“So I didn’t go to GHAMRO like the woman (Ama Rasta) who went there to curse them, I wanted to understand them, and that’s why I called for a meeting, and they, in turn, gave me a listening ear which I very much respect till date.”

He added, “We conversed, and that was where they even revealed that I had ¢2,000 sitting there. I was actually amazed that I had up to that amount because that meant my case was better.”

A few days ago, the singer revealed that ever since he became a professional musician, he has only received an amount of ¢2,000 as royalties from GHAMRO.

He shared this with Ghana’s High Commissioner to the United Kingdom, Papa Owusu-Ankomah, when he paid a courtesy call on him ahead of his performance at the Yam Carnival in the UK.

At that meeting, he said, “They do not pay us, and I am stating this on camera. The conversation is big in Ghana, and everybody knows it”.

He further stated, “It is not by force to go on a tour and perform; that is not obligatory. But as musicians, we do not make money from our intellectual property.”

But CEO of Ghana Music Rights Organization (GHAMRO), Abraham Adjetey reacting to Stonebwoys comment, said the ‘Putuu’ hitmaker has not updated his records at the royalties collection agency.

“According to the royalties collection agency’s website, it is a non-profit corporate body (limited by guarantee), and, therefore, all fees collected are distributed among the right owners whose works have been used, in this instance, composers, authors and producers, publishers in proportion to the use made of their works”.

CEO, Abraham Adjetey, says his team recently had a meeting with Stonebwoy and his team and advised him to update his records, but all efforts to get him to do the needful have proven futile.

“Recently we had a meeting with him together, and he indicated to us that he will send somebody. In fact, we took some pictures outside, but to date, nobody has come back,” he said.

DISCLAIMER: The Views, Comments, Opinions, Contributions and Statements made by Readers and Contributors on this platform do not necessarily represent the views or policy of Multimedia Group Limited.
Tags:
GHAMRO
Royalties
Stonebwoy