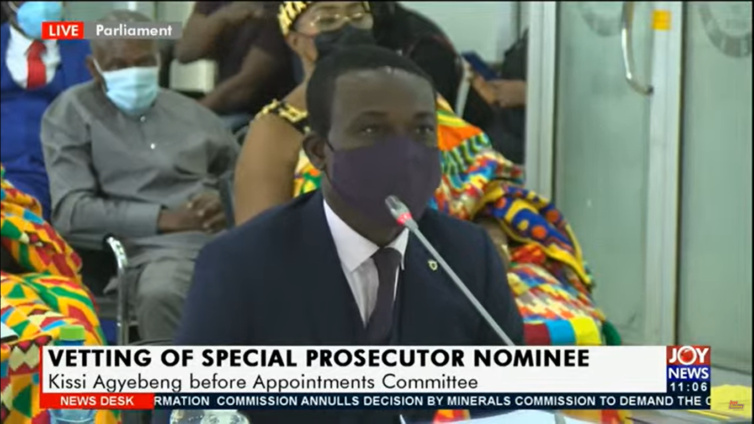 Fighter General of the Economic Fighter’s League (EFL), Hardi Yakubu has expressed disquiet about the interruption of Special Prosecutor nominee, Kissi Agyebeng, when he started answering the question relating to how he would fight corruption.

The nominee was interrupted with a follow up question by MP for Tamale South, Haruna Iddrisu during the vetting by Parliament’s Appointment Committee on July 22.

Hardi Yakubu told Mamavi Owusu Aboagye on the AM Show, Friday, that by the interruption, the Committee did not help Ghanaians to ascertain what Mr Agyebeng meant by his “Pressure for Progress” strategy to fight the canker.

“I was a bit disappointed when Kissi Agyebeng was going to talk about how he was going to use something he called “Pressure for Progress”, in fighting corruption. But just there and then he was cut short by another question and I think that didn’t really go down well with me.

This notwithstanding, Mr Agyebeng mentioned other activities he will undertake to fight corruption if given the nod.

“I am not naive to say that I am here to stop corruption, and indeed God himself will not even acclaim to that, but I’m going to make corruption very costly to engage in.

“I will institute a systemic review of public sector institutions and the development of integrity. “Why can’t we have our own corruption perception index and publish them as to which institution is performing well and in that quest. If you are head and your sector is drawing the last straw, I’m sure you will sit up and this, the law gives me the mandate to do,” he indicated.