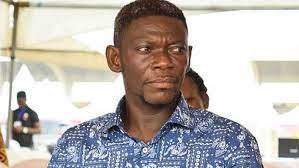 Popular Kumawood actor Agya Koo has revealed that he began to lose his eyesight at some point in his acting career.

According to him, this health condition influenced his decision to film movie scenes only during the day for convenience, primarily since the lights used in filming contributed to the problems with his sight.

Speaking in an interview on Angel FM in Kumasi, he stated that he informed some filmmakers he worked with about his issue, and they were accommodating.

However, other filmmakers assumed he was only being arrogant after gaining popularity in the industry and saw himself as an asset with no competitor, Agya Koo stated.

He alleged that some producers then plotted to kick him out of the industry.

Kofi Adu added that he was treated terribly by some of them and later blackballed.

He stated that the producers instead needed and still would like Agya Koo on set.

Mr Ekpe Peter challenged Agya Koo to call out the filmmakers he believed orchestrated his exit from the industry.

He explained that there is a need to revive the industry, which would mean every experience hand must be on deck.

The PRO said it is essential to address this issue and get Agya Koo and other actors back to filming in the industry’s interest.