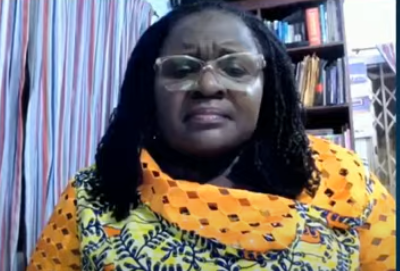 The Executive Director of the Ghana Integrity Initiative (GII), Linda Ofori-Kwafo, has asked journalists to ignore the Speaker’s advice to them with reference to their role in exposing the wrong deeds of leaders.

She said doing so will have repercussions for them.

The Speaker, Mr. Alban S.K. Bagbin, while addressing the newly sworn-in Parliamentary Press Corps on Monday, entreated the journalists to be mindful of their reportage, especially when criticising leaders.

“Leaders don’t stand alone. They stand for something that is symbolic to the country. Criticize us, correct your children, but don’t break their hands or their legs, it will affect you,” Mr. Bagbin stressed.

Mr Bagbin made reference to the case of former GFA President, Kwesi Nyantakyi who was dismissed from his post after he was found guilty of corruption, and said the dismissal has largely affected the Association.

According to him, Mr. Nyantakyi’s indictment brought Ghana Football down.

Speaking on the Super Morning Show, on Tuesday, April 5, in reaction to the Speaker’s advice, Mrs. Ofori-Kwafo disagreed with him.

“It’s like telling them to be careful in this new role that you’re taking up and that in all your dealings you can actually help catch the small flies, but the big ones you should be careful.”

She contended that ‘big men’ are brought down by their own deeds and not any journalist.

“Who brings any big person down if not for their own deeds? They bring themselves down. The big men know the laws, they know the rules and then they decide to engage in acts that amount to corruption. When they are found through investigative journalism they are sanctioned accordingly. So the Speaker talking this way is just like telling them that as they take up this role, they can actually do everything else but try not to bring them down,” she said.

She stressed that “corruption is the number one developmental challenge that we have as a country and it’s not getting any better,” it has thus, become imperative for the fight against the canker to be championed.

“If you look at the CPI scores, the Afro barometer scores and all that, and all the surveys still point out that this is still a problem and the media have a very important role to play and it doesn’t matter where they are operating from, if leaders are found to be corrupt, they have to be investigated, they have to be sanctioned and we move on,” she said.