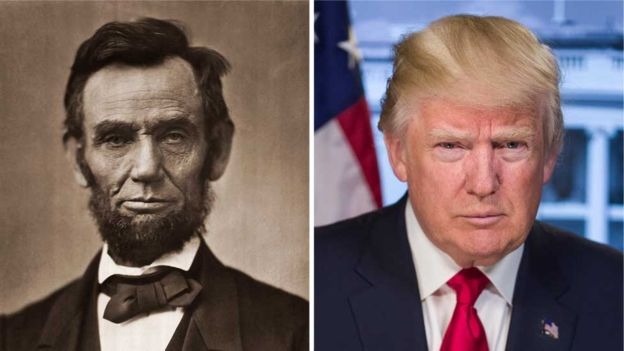 From expelling an aide for coughing, to insisting he is treated worse than assassinated US Civil War leader Abraham Lincoln, to whether UFOs exist, President Donald Trump dropped a number of notable lines in a television interview.

The president hosted ABC News at the White House, shedding some light on his thinking as he prepares to launch his 2020 re-election campaign in Florida on Tuesday.

When Mick Mulvaney, acting White House chief of staff, coughed in the background of the Oval Office interview, Mr Trump became visibly upset and asked his top aide to leave the room.

"If you're going to cough, please leave the room," the president added, pointing and shaking his head in disapproval. "You just can't, you just can't cough."

The exchange happened as Mr Trump defended his decision not to turn over his "fantastic financial statement" to the US Senate, adding that he "might" reveal it someday.

Anthony's take: Was Mr Mulvaney signalling to the president to be careful when talking about his tax returns? Or maybe he was choking on the president's answer.

Whatever the reason, it's hard to imagine the previous chief of staff, former Marine General John Kelly, putting up with such a curt dismissal.

The Trump campaign has fired several of its hired pollsters after leaks showed Mr Trump losing to Democrats next year in several key battleground states, according to US media.

But in the interview, Mr Trump denied there were any unflattering popularity figures, maintaining that his team's internal polls "show I'm winning everywhere".

On Monday, he returned to the theme on Twitter, saying: "Only Fake Polls show us behind the Motley Crew" – a reference to the crowded Democratic presidential field.

Anthony's take: As the old bit of advice goes, don't kill the bearer of bad news. The president's "private" polling roughly matches up with the public surveys that have been recently released showing that, despite a booming economy, Mr Trump has an uphill fight for re-election.

With voting more than 16 months away, however, the numbers are relatively unimportant. If this is how the president reacts to adversity, however, it's a bad sign for the stability of his campaign operation.

Mr Trump argued that no president has ever been as mistreated as himself, including Abe Lincoln, who was shot dead.

"If you can believe it, Abraham Lincoln was treated supposedly very badly," he said. "But nobody's been treated badly like me."

Mr Trump, who calls himself a student of history, has previously drawn comparisons with the 16th president. During a rally last September in Montana, Mr Trump said Lincoln's legendary Gettysburg Address "was excoriated by the fake news".

And during his first election campaign, Mr Trump claimed: "With the exception of the late, great Abraham Lincoln, I can be more presidential than any president that's ever held this office." 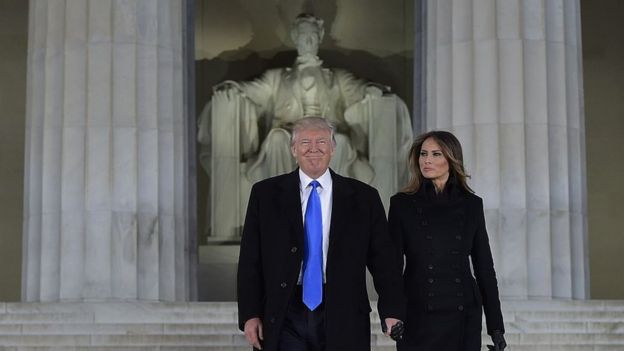 Anthony's take: Donald Trump reportedly plans to deliver a Fourth of July address from the steps of the Lincoln Memorial. Perhaps at some point during his speech, he can turn to the statue of Abe and compare presidential notes.

"They do say, I mean, I've seen and I've read and I've heard, and I did have one very brief meeting on it," said the president. "But people are saying they're seeing UFOs.

"Do I believe it? Not particularly."

When ABC asked him if the US president would be made aware if there was evidence of extraterrestrials, Mr Trump did not directly answer the question.

He said: "Well, I think my great pilots, our great pilots would know. And some of them really see things that are a little bit different than in the past, so we're going to see, but we'll watch it."

Anthony's take:Donald Trump may have pushed for the release of more information about the Kennedy assassination, but alien conspiracy theorists will surely be disappointed with his UFO answer.

If the truth is out there, they'll have to find it without the president's help.

With election season nearing, the Republican president indicated he would launch a new plan to revamp the nation's healthcare system.

"Obamacare has been a disaster," Mr Trump told ABC as he was driven in the presidential limousine dubbed The Beast.

He promised that the plan for "phenomenal healthcare" will be unveiled "in about two months, maybe less".

Anthony's take: Cue the hyperventilation of Republican members of Congress once again. Conservative politicians paid a high price in the 2018 mid-term elections for their attempts to repeal Obamacare early in the Trump presidency.

The last thing they want is to have their 2020 electoral hopes tied to a healthcare plan that is sure to be savaged by their opponents as soon as it's revealed.

Mr Trump, who once promised to completely eliminate the national debt over two terms in office, defended its continued climb under his own watch.

"They doubled the debt on nonsense," he said of the Obama administration.

But when the interviewer noted the debt has not stopped accumulating during Mr Trump's presidency, he responded: "Sure. But I have to rebuild the military."

Anthony's take: As the Bush administration pushed for sweeping tax cuts in 2002, Republican Vice-President Dick Cheney once famously said that budget deficits "don't matter". During the Obama presidency a few years later, however, Republicans were once again devoted budget hawks.

When it comes to the ballooning national debt, whether through government spending or tax reductions, both sides hate it when the other side is responsible. In this regard, Mr Trump is a very conventional politician.