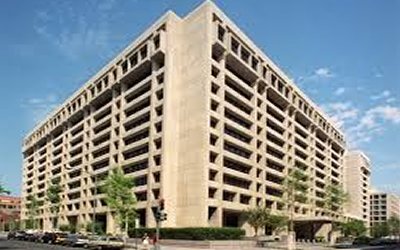 The International Monetary Fund (IMF) has trimmed its forecast for global economic growth at the same time as lifting its UK growth projection.

It cited weakness in emerging economies for the cut.

The forecast for UK growth this year received a significant upgrade to 1.4%, up from July's estimate of 0.9%.

The IMF's upgrades for its outlook on the UK are larger than those it made for any other country in its World Economic Outlook – its twice-yearly assessment of the global economy.

It credited recent data indicating higher consumer and business confidence, for the increase.

However, it warned that it would still take years for the UK economy to recover fully from the 2008 financial crisis. It suggested that the government could help boost growth by bringing forward planned public infrastructure spending, such as building new homes.

"But risks to the global economy remain high, and the recovery cannot be taken for granted. That is why the government will not let up in implementing its economic plan," a spokesman added.

It expects growth in Russia, China, India and Mexico to be slower than it forecast in July.

In part, it says this is due to expectations of a change in policy by US central bank the Federal Reserve. Simply the expectation that the US could trim back its efforts to stimulate the US economy has already had an impact on interest rates in emerging economies, the IMF said.

It said an increasing belief that China's growth rate would slow would also hit global growth.

The IMF expects the US to drive global growth.

But it warns that the political standoff over raising the US government's borrowing limit, if it results in the US defaulting on its debt payments, "could seriously damage the global economy".

In the US capital on Tuesday, Republicans in Congress and Democratic President Barack Obama remained at an impasse over a shutdown of the US government and legislation to increase the US borrowing limit.

At a news conference, Mr Obama stressed that failing to raise America's so-called 'debt ceiling' would undermine the world's confidence in the United States and might permanently increase borrowing costs.

Mr Obama and House Speaker John Boehner, leader of opposition Republicans who have demanded major policy concessions from the Democrats in exchange for approving a government budget and allowing debt limit increase, spoke on the telephone on Tuesday but failed to reach a resolution.

In the euro area, the IMF says business confidence indicators suggest activity is close to stabilising in peripheral economies, such as Italy and Spain, and already recovering in core economies such as Germany.

Overall, it predicts growth will fall 0.4% this year, an improvement of 0.1% on its July prediction, and grow 1% next year.

"In short, the recovery from the crisis continues, albeit too slowly," said Olivier Blanchard, economic counsellor at the IMF.

"The architecture of the financial system is evolving, and its future shape is still unclear. These issues will continue to shape the evolution of the world economy for many years to come."