IMF downgrades US and UK growth

The International Monetary Fund (IMF) has lowered its forecasts for US and UK economic growth this year, following "weaker-than-expected activity" in the first three months.

The IMF says it now expects the UK to grow by 1.7% this year, compared with the 2% it was previously forecasting.

In its latest World Economic Outlook, the IMF said the "pick-up in global growth" that it had anticipated in its previous survey in April "remains on track".

However, it added: "The unchanged global growth projections mask somewhat different contributions at the country level."

A Treasury spokesperson said the IMF forecast underlined why the government's plans to increase productivity and get "the very best deal with the EU" after Brexit were "vitally important".

"Employment is at a record high and the deficit is down by three quarters, showing that the fundamentals of our economy are strong," they added.

The UK growth forecast for 2018 remains unchanged at 1.5%, but US growth for next year is now predicted to come in at 2.1%, instead of the 2.5% previously forecast.

"While the markdown in the [US] 2017 forecast reflects in part the weak growth outturn in the first quarter of the year, the major factor behind the growth revision, especially for 2018, is the assumption that fiscal policy will be less expansionary than previously assumed, given the uncertainty about the timing and nature of US fiscal policy changes," the IMF said. 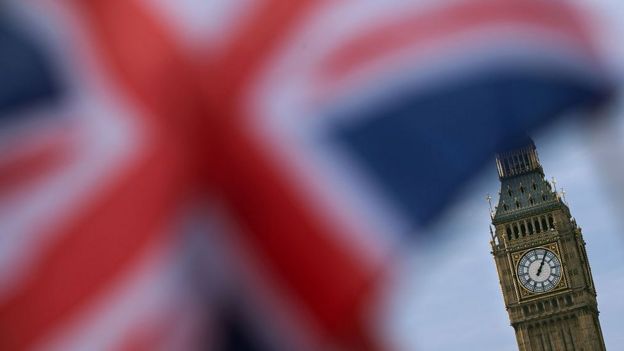 The downgrade in the UK's forecast reflects the weak start to the year.

The economy grew by 0.2% in the first three months. That is all we get by way of explanation from the IMF.

It is a short report – just seven pages – and it updates the IMF's assessment for the whole world economy so there isn't much space to spell it out.

The IMF is well known, some would say notorious, for warning before last year's referendum of the adverse economic consequences of leaving the European Union.

Do the agency's economists think that the downgrade reflects evidence suggesting that they were right? The report doesn't say. We can only guess.

But we will get a bit of hard evidence on how justified the downgrade was or was not later this week, when the Office for National Statistics publishes its first estimate of economic growth in the second quarter of the year.

President Donald Trump's administration had been widely expected to pursue policies including tax cuts and infrastructure investment, which would have given a boost to the US economy.

At the same time, the IMF has revised up projections for a number of eurozone economies, including France, Germany, Italy and Spain. It said first-quarter growth in those countries "was generally above expectations".

"This, together with positive growth revisions for the last quarter of 2016 and high-frequency indicators for the second quarter of 2017, indicate stronger momentum in domestic demand than previously anticipated," it added.

The biggest eurozone revisions were for the Spanish and Italian economies. Spain is now forecast to grow 3.1% this year, up from the previous prediction of 2.6%. Italy's 2017 growth forecast has risen from 0.8% to 1.3%.

China's growth projections have also been revised up, reflecting, the Fund says, "a strong first quarter of 2017 and expectations of continued fiscal support".

The IMF hailed China's "policy easing and supply-side reforms", including efforts to reduce excess capacity in the industrial sector.