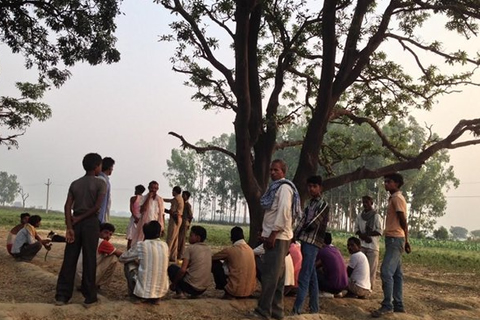 There is outrage over police inaction in a village in the Indian state of Uttar Pradesh where two teenage girls were gang raped and hanged from a tree.

The father of one victim said he was ridiculed by policemen when he sought help in finding his missing daughter.

He said when the policemen found out he was from a lower caste, they "refused to look for my girl".

At least three men, including one policeman, have been arrested in connection with the incident.

The victims' families have complained that police had refused to help find the missing girls, aged 14 and 16.

India has numerous castes and divisions among them run deep. Violence is often used by upper castes to assert power and instil fear in lower castes.

Police said two men had been arrested for the gang rape and murder of the two girls, who were cousins from a low caste.

A constable was also detained for conspiring with the suspects and for dereliction of duty, authorities said, adding they were looking for one more suspect and one constable.

"[When I went to register a complaint to the police station about my missing daughter] the first thing I was asked was my caste. When they found out that I came from a low caste, they shooed me away and refused to look for the girls," the father of one of the victims told the BBC.

He said instead of helping him, the police "helped the accused as both were of the same caste".

Though both the victim and the accused belonged to a caste grouping 'Other Backward Classes', the victims were placed lower in the caste hierarchy.

Senior police official Atul Saxena said there would be a "thorough investigation" into the allegations of caste discrimination by the police.

People in Katra Shahadatganj, a village of 10,000 people in Badaun district where the incident took place, say caste "plays an important role in social affairs" in the community.

Rape cases that have shocked India

A neighbour of one of the victim said the police "discriminated" against people from the lower castes in the village.

"Even though the police has suspended some constables, the ones who replace them would not be any better, they would discriminate too," he said.

"People from our caste are poor and illiterate and do not get employed in positions of power and influence."

Mr Saxena denied that caste biases played any part in "influencing police behaviour" in the state.

"The police follows its rule book and considers all criminals equal before the law. There might be one or two cases like this one and we will make sure that the culprit doesn't go scot-free," he said.