An early-morning Lion Air flight from Jakarta to Pangkal Pinang crashed just 13 minutes after taking off with 189 people on board.

Authorities say there is little chance of any survivors – this is what we know about who was on board.

According to Lion Air the aircraft was carrying 178 adult passengers, one child and two babies. In addition to the two pilots, there were also six cabin crew.

Search operations to find both the victims and the aircraft will continue throughout the night.

Lion Air named Captain Bhavye Suneja as pilot of the plane. The Indian national's death was confirmed by the Indian Embassy in Jakarta. Mr Suneja was 31 years old and from Delhi, Indian media report. He joined Lion Air in 2011, according to his LinkedIn profile.

The co-pilot was named as Harvino.

Captain Suneja had more than 6,000 flight hours under his belt and the co-pilot had more than 5,000 flying hours, so the pair in the cockpit were experienced.

One of the crew was a technician and three were flight attendants under training, the airline said.

At Jakarta's Halim Perdanakusuma airport, distraught family members have been waiting for information about their loved ones.

Murtado Kurniawan's wife was on the plane. They are newly married and she was making the journey for work.

"I can't live without her, I love her," he says through tears. "The last thing I said to her, was 'be careful'. I always worry about her when she goes away. When I saw on TV that the plane had crashed, my whole body went weak." 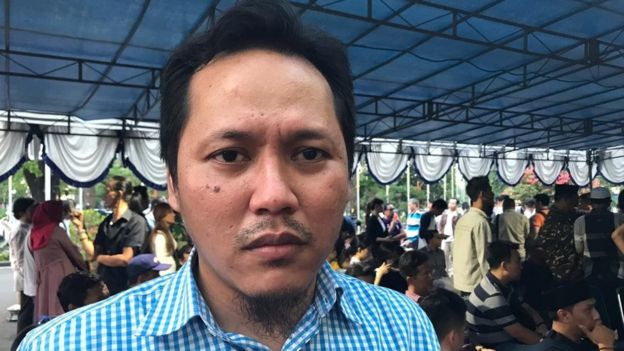 Another family member waiting for news is Dede. She told the BBC she had dropped her niece Fiona Ayu and her family off at the airport on Monday morning, to make the short journey to their home town.

Fiona was trying to get pregnant via IVF and her family had thought it would be good for her to get some rest out of Jakarta. 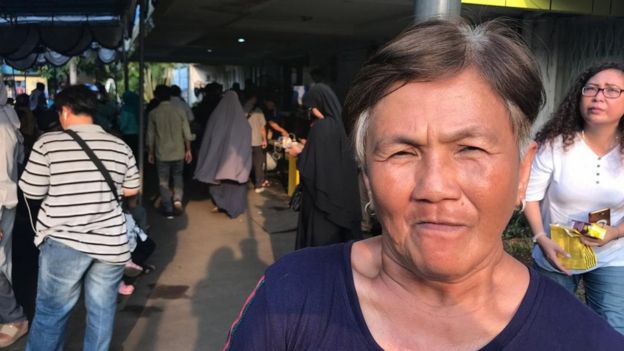 Image captionDede dropped off her niece, Fiona Ayu, at the airport

"The airline kept telling us to wait and wait for news, but the images on social media and television are very bad," Dede says. "But I am still holding out hope that she will come back, I am praying and praying for that.

Among the photographs of debris collected from the ocean and thought to be on the plane was one iPhone case with a distinctive image of a couple walking over a bridge.

Within a few hours, users on Indonesian social media thought they had identified the image on Instagram and zeroed in on one user's account. 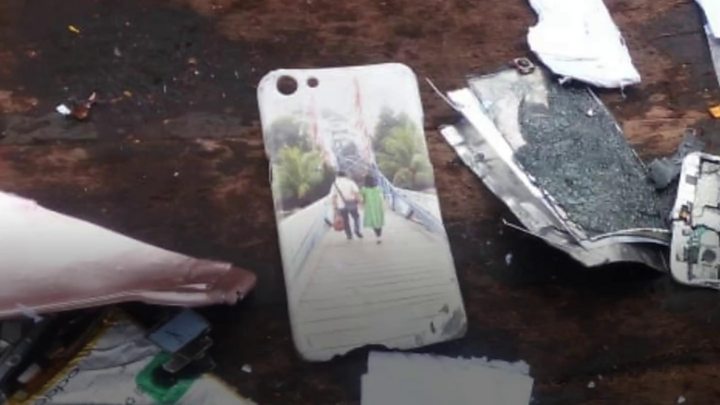 But there remains no confirmation of the identities of the couple pictured.

Michelle Vergina Bongkal, 21, was on her way to Pangkal Pina attend the funeral of her grandmother. Travelling with her was her brother, Mathew, 13, and father Adonia, 52.

Her sister, Vina, told the BBC the family had already been grieving the death of the grandmother and has now been left reeling from the plane crash.

She said the family often travelled this route but normally preferred to use other airlines. This time, because of the need to find an early flight to attend the funeral, they chose the budget carrier.

Michelle had spoken to her mother shortly before flying, at around 06:00, Vina said. Soon after, they received news of the crash.

"Until around 07:30 we were still trying to call Michelle, hoping to hear an answer, but there was no dial tone."

Twenty employees of the finance ministry were on board and Finance Minister Sri Mulyani has been consoling victims' family members and staff at the ministry's office in Jakarta.

Those on board had worked at the ministry's offices in Pangkal Pinang and were returning to work after spending the weekend in Jakarta, spokesperson Nufransa Wira Sakti told the BBC.

He added that they had routinely taken this early-morning Lion Air flight because it was the one that would get them to the office in time. 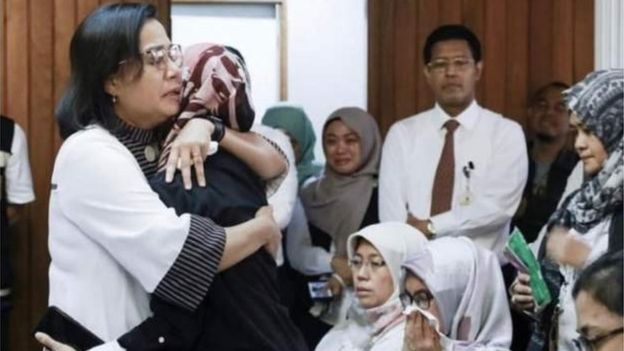 Fellow employee Sony Setiawan had meant to be on the flight but he missed check-in after getting stuck in traffic.

"I know my friends were on that flight," he told AFP news agency. He only found out about his colleagues' fate, and his fortuitous escape, after he arrived in Pangkal Pinang at 09:40.

"My family was in shock and my mother cried but I told them I was safe, so I just have to be grateful."