IS runaway teen ‘could face prosecution in UK’

A British woman who ran away to Syria as a schoolgirl to join the Islamic State group has been told she could face prosecution if she returns home.

Shamima Begum, now 19 and pregnant, told the Times she had no regrets but wanted to have her baby in the UK.

She said she had heard that Amira Abase, one of the two girls she fled to Syria with, was still alive.

Her father, Abase Hussen, broke down on hearing the news and appealed to the UK government to bring both women home.

In her interview, Ms Begum, who married an IS fighter, showed little remorse for her involvement with the terror group, saying she was not fazed by seeing "beheaded heads" in bins.

"I don't regret coming here," she told Times journalist Anthony Loyd, who found her in the camp.

"I'm not the same silly little 15-year-old schoolgirl who ran away from Bethnal Green four years ago."

"The caliphate is over. There was so much oppression and corruption that I don't think they deserved victory," she said.

"I just want to come home to have my child. I'll do anything required just to be able to come home and live quietly with my child."

But Mr Wallace said any Britons who had gone to Syria to engage or support terrorist activities should be prepared to be questioned, investigated and potentially prosecuted if they came back to the UK.

He said there was no consular assistance in Syria and insisted he would not be sending British officials there to rescue Ms Begum.

"I'm not putting at risk British people's lives to go and look for terrorists or former terrorists in a failed state," he told the BBC.

Ms Begum was one of three schoolgirls from Bethnal Green Academy who left the UK in February 2015.

Ms Begum and Amira Abase, both 15, and Kadiza Sultana, 16, flew from Gatwick Airport to Turkey after telling their parents they were going out for the day.

They later crossed the border into Syria.

On arriving in Raqqa, Ms Begum stayed at a house with other newly-arrived brides-to-be.

"I applied to marry an English-speaking fighter between 20 and 25 years old," she said.

Ten days later she married a 27-year-old Dutch man who had converted to Islam – and has been with him since then.

Her husband surrendered to a group of Syrian fighters as they left, and she is now one of 39,000 people in a refugee camp in northern Syria.

Asked whether living in the one-time IS stronghold of Raqqa had lived up to her aspirations, Ms Begum said: "Yes, it did.

"Every now and then there are bombs and stuff. But other than that…"

She said that seeing her first "severed head" in a bin "didn't faze me at all".

"It was from a captured fighter seized on the battlefield, an enemy of Islam.

"I thought only of what he would have done to a Muslim woman if he had the chance," she said. 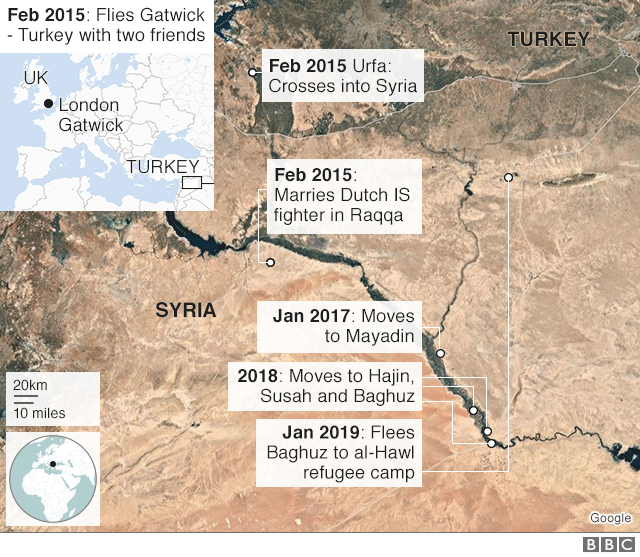