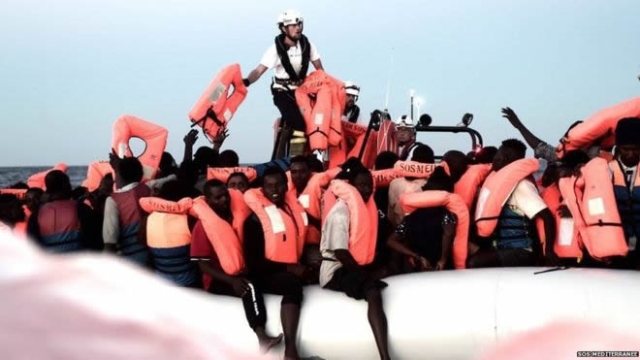 Italy's new interior minister has refused permission for a rescue vessel to drop off 629 migrants picked up off Libya's coast.

Matteo Salvini, leader of the far-right League, said Malta should let the Aquarius dock but he was rejected.

Malta said the German charity SOS Méditerranée had picked up the migrants in Libyan waters, which meant they fell under Italy's jurisdiction

Italy is the main entry for migrants crossing from North Africa to Europe.

The League promised voters during Italy's recent general election that it would take a tough stance on immigration.

It reports that 629 migrants were picked up in six different rescue operations off Libya's coast on Sunday.

"Our objective is the disembarkation in a port of safety of the 629 people now on board the Aquarius – some we rescued yesterday night in difficult conditions," charity spokesperson Mathilde Auvillain was quoted as saying by Reuters news agency.

What is Salvini's position?

He said on Sunday that Italy was saying "no to human trafficking, no to the business of illegal immigration".

"Malta takes in nobody," he said. "France pushes people back at the border, Spain defends its frontier with weapons."

"It is not possible for Malta to say 'no' to every request for help. The Good Lord put Malta closer than Sicily to Africa."

Mr Salvini says he is considering action against organisations rescuing migrants at sea. He has previously accused them of being in cahoots with people-smugglers.

The government's critics say its plan to repatriate migrants is unworkable and risks fomenting racism and politicising a humanitarian issue.

A controversial deal between Italy's former government and authorities in Libya has led to a drop in overall arrivals since last summer but Italian officials say 13,500 migrants have been registered so far this year.

How has Malta responded?

A spokesman for the Maltese government told AFP news agency Malta was "neither the coordinating nor the competent authority" in the rescue operation.

Mr Salvini earlier accused the Maltese government of not doing its fair share when another rescue ship, the Seefuchs, was stranded in volatile seas with 126 migrants on board.

Malta reportedly refused to send assistance to the vessel and it was allowed to dock in the Sicilian port of Pozzallo on Saturday, the non-governmental organisation Sea Watch reported.

Malta's government insisted it had adhered to all its obligations regarding immigration.