'It's a good time to be in charge of your area' - Akufo-Addo to MMDCEs - MyJoyOnline.com 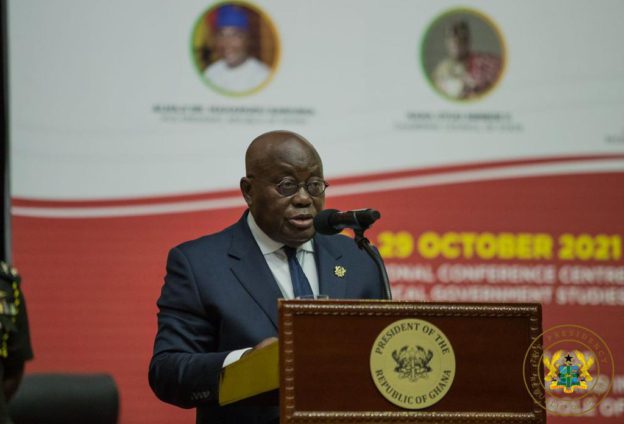 President Akufo-Addo has told newly-confirmed Metropolitan, Municipal and District Chief Executives (MMDCEs) that it continues to be a “good time to be in charge of districts, municipal and metropolitan areas”, as they have the opportunity to transform their local economies, and preside over the creation of jobs for the Ghanaian people.

According to President Akufo-Addo, the local area is the target for all the programmes set forth by his government in 2017, programmes that continue to be implemented for the growth and transformation of the Ghanaian economy.

“‘Planting for Food and Jobs’, ‘One Million Dollar One Constituency”, “One District One Factory”, and “One Village One Dam” and “Agenda 111” policy initiatives, like all the other innovative introductions to the economy, are all very much local initiatives… The challenge is, thus, for all areas to take advantage of these programmes to develop your localities,” he said.

The President made this known on Tuesday, October 26, 2021, when he delivered the keynote speech at the orientation ceremony held for newly confirmed Metropolitan, Municipal and District Chief Executives, at the Accra International Conference Centre.

Whilst admonishing the MMDCEs to be minded of the fact that all Government initiatives at the local level come within their purview, whether initiated by them or not, he stressed that “the argument that you are not aware of, or are not responsible for government initiatives in your localities, will not wash with me”.

He continued, “You have to familiarise yourself with everything, whether of your making or not. A Chief Executive, who is indifferent or unaware of government activities in his or her area, is not a suitable Chief Executive… Be reminded, however, that I will not hesitate to “disappoint” any MMDCE who does not live up to expectations.”.

President Akufo-Addo urged the MMDCEs to acquaint themselves with all the relevant laws, and work in close collaboration with their Assemblies, traditional authorities, opinion leaders, religious leaders and other key stakeholders in their localities, urging them further to ensure that the Assemblies function effectively and efficiently, especially in the sub-structures.

“Avoid getting involved in unnecessary conflicts that rather dent the image of the Assembly and, by extension, Government. Rather, work with your staff, deepen transparency, and promote popular participation and accountability at the local level. These are the hallmarks for successful leadership and the attainment of results. If you are fruitful in this, then we would be making good progress towards strengthening the structure of our governance system, and bringing democracy and progress to local government,” the President added.

In reminding the MMDCEs of the chain of command, he stressed that the Minister for Local Government, Decentralisation and Rural Development, Hon. Botwe, Kwaku Botwe, has oversight responsibility for decentralisation implementation and local government.

Whilst imploring them to be careful and tactful in managing issues of intelligence and security, the President requested that all MMDCEs, in accordance with the Public Office Holders (Declaration of Assets and Disqualification) Act, 1998, (Act 550), (Schedule 1 (V)), should, within three (3) months of assuming office, declare their assets.

This exercise, he indicated, will be monitored, especially as “it is important that the Ghanaian people understand that, for us, public service is exactly that, public service, not personal gain.”

On the matter of the election of MMDCEs, the President noted that there is anything to fear in the direct election of Chief Executives, as it will, on the contrary, should lead to a deepening of democracy and better accountability.

“My Government and I will continue to work for a broad, national consensus on this issue, and should such a consensus be attained for the repeal of article 55(3) of the Constitution, and an agreement reached for political parties to participate in and sponsor candidates for election to Metropolitan, Municipal and District Assemblies, at any point during my tenure of office as President of the Republic, the matter will be brought again back to the front burner of our public discourse for the necessary action,” President Akufo-Addo stated.