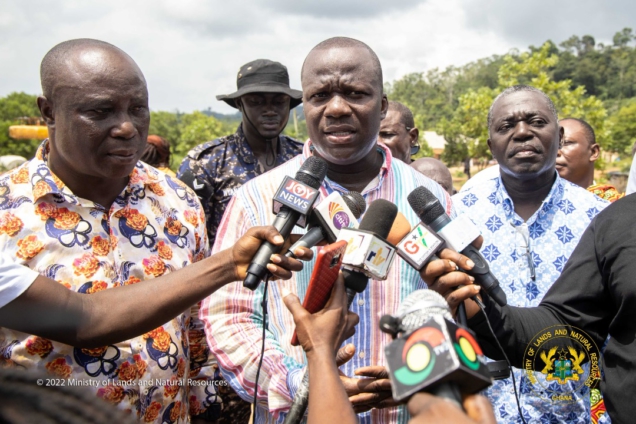 The Lands Minister, Samuel Jinapor, has expressed shock at the spate of devastation on lands in the Amansie South Municipality of the Ashanti Region.

According to him, owners of institutions that are engaging in mining activities in the area must be dealt with for the level of destruction caused by their acts.

He, therefore, wants political heads, security agencies and the Minerals Commission to find answers to the situation.

“It should baffle all of us as citizens and policymakers and stakeholders in this fight how an operation like this in the heart of the forest and the far away areas of our country can go on without notice by police, chiefs, the local political leadership, assembly people, the District Chief Executive and even the inspectorate division of the minerals commission here,” Mr Jinapor said.

During a visit of the area on Thursday, the Minister found deep pits dotted all over the place.

According to JoyNews reporter Nana Yaw Gyimah, a land likened to the size of a town is completely destroyed by illegal mining activities.

“Per the devastation on the ground, illegal mining in the Amansie area has persisted for years without any restrictions,” he reported.

The Minister has assured that government will not renege on efforts to deal with the situation, adding that the war on illegal mining has not wavered.

“It will require the concerted efforts of all of us; it cannot be the fight for government alone or for ministers alone. That should be the fight for all of us, citizens and all the actors in the body politic of Ghana.

“Yesterday, the President himself chaired a meeting on this matter and extensive discussions took place and we would continue relentlessly with integrity to do our best with this matter of illegal mining operations in this country.

“The Ghanaian people should be rest assured that whatever we have to do to make sure that we get to a satisfactory situation in this country in respect of this canker, we will do so,” the Damongo Member of Parliament added.

DISCLAIMER: The Views, Comments, Opinions, Contributions and Statements made by Readers and Contributors on this platform do not necessarily represent the views or policy of Multimedia Group Limited.
Tags:
Amansie South
Ashanti Region
Galamsey
Illegal mining
Samuel Jinapor