Some of the biggest names in entertainment have re-launched the music subscription service Tidal, which they are billing as the first artist-owned platform for music and video.

At an event in New York on Monday, Madonna, Beyonce, Kanye West, and 13 other performers announced they had become co-owners of Tidal.

The service launched last October, but was recently bought by rapper Jay Z. Jay Z and Kanye West at the launch

It is hoping to compete with the likes of Spotify, Deezer and Google Play.

However Tidal offers 25 million music tracks, fewer than the 30 million offered by many rival services.

As well as a standard subscription for $9.99 a month, Tidal offers a "high fidelity" option for $19.99, which claims to deliver better sound quality.

Singer Alicia Keys spoke on behalf of the artists as they all lined up on stage at Skylight at Moynihan Station in Manhattan.

Describing the event as a "graduation", she said the artists hoped Tidal would alter musical evolution. 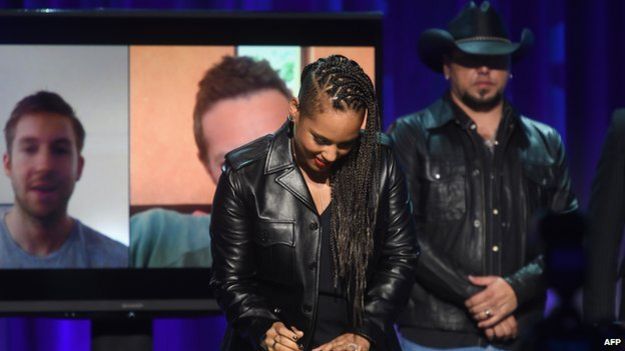 "So we come together before you on this day, March 30th, 2015, with one voice in unity in the hopes that today will be another one of those moments in time, a moment that will forever change the course of music history."

Their mission, she said, goes beyond commerce and technology.

"Our intent is to preserve music's importance in our lives,'' she said.

A host of the biggest acts in music have been announced as part-owners of Jay-Z's Tidal streaming service, during a star-studded launch event in New York.

Notably, the majority of the company will be owned by artists, a symbolic move in a business where musicians often have little control over how their work is distributed and consumed.

Jay Z's strategy will include encouraging artists to lobby their labels to give Tidal new music a week in advance of other services, giving it a short window of exclusivity.

He told Billboard: "We didn't like the direction music was going and thought maybe we could get in and strike an honest blow.