Jordan ‘bombs IS’ after pilot death

Jordan says its warplanes have carried out their first air strikes on Islamic State (IS) targets since the militants released a video showing the killing of a captured Jordanian pilot.

On their way back, the planes flew over the village of pilot Moaz al-Kasasbeh.

Their flight coincided with a visit to the village by Jordanian King Abdullah II, who was meeting the pilot's family.

The king has vowed to the step up the fight against IS. Jordan is part of a US-led coalition bombing the militants.

Lt Kasasbeh was captured by the militants last year after his F-16 fighter jet crashed in Syria. IS this week released a video showing the pilot being burned alive in a cage, sparking calls for revenge in Jordan.

State television pictures on Thursday showed the king sitting sombre-faced with Saif al-Kasasbeh, the pilot's father, at a gathering in Aya village, near the city of Karak, south of the capital Amman.

The king gestured to the skies as the warplanes flew overhead, media reports said.

Mr Kasasbeh told mourners that the aircraft were returning from a raid on Syria's Raqqa, the de facto capital of the militants' self-declared caliphate, which spans territory in Iraq and Syria.

The army did not specify the location of the air strikes, but said in a statement that "dozens of jet fighters" had struck IS targets, including training camps and weapons warehouses.

The air strikes were "just the beginning", the statement added.

State television showed people writing messages on what appeared to be missiles for the air strikes, with one calling IS "the enemies of Islam". 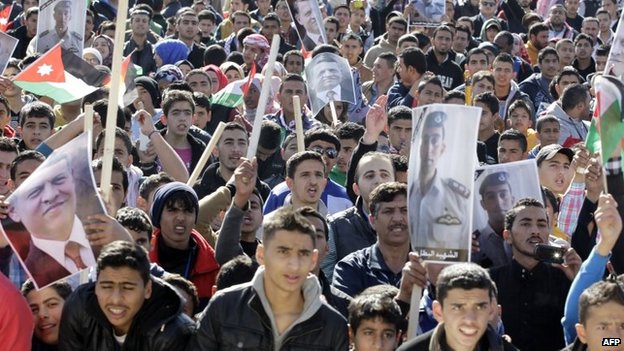 A security official quoted by Reuters news agency said the air strikes had targeted IS in Syria.

Maqdisi, who has previously condemned IS as a "deviant organisation", was detained in late 2014 for promoting jihadist views online.

The reason for his release was unclear, but security sources told Reuters that Maqdisi was expected to condemn the burning of the pilot.

On Wednesday, Jordan responded to the killing of the pilot by executing two convicts, including Sajida al-Rishawi, a failed female suicide bomber. 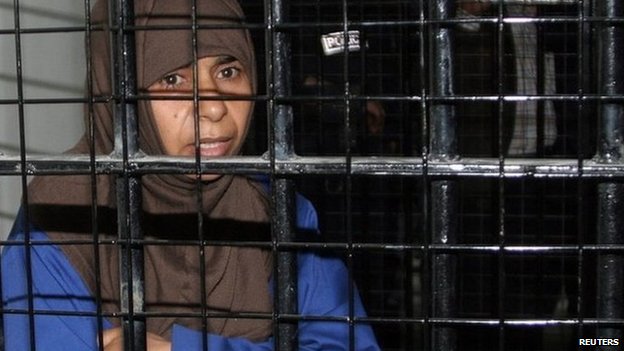 Last week, IS had demanded the release of Rishawi in return for sparing the pilot's life. However, it is now believed that IS had in fact killed the pilot a month ago.

Meanwhile, the US military said that the US-led coalition had conducted a total of nine air strikes on IS-targets in Iraq, and three on targets in Syria, between Wednesday and Thursday morning.

Those strikes hit IS units near the Syrian town of Kobane, and in seven Iraqi cities including Fallujah, Kirkuk and Mosul, the Combined Joint Task Force said in a statement.

On Thursday, Mr Kasasbeh praised the king and condemned the militants.

"You are a wise monarch," Reuters quotes him as saying. "These criminals violated the rules of war in Islam and they have no humanity."

Jordan is one of four Arab states to have taken part in the anti-IS air strikes in Syria. The other countries are Saudi Arabia, the United Arab Emirates and Qatar.

US officials told the BBC on Wednesday that the UAE had suspended its involvement in the strikes after Lt Kasasbeh was captured in December.

The New York Times quoted officials as saying the UAE wanted the Pentagon to improve its search-and-rescue efforts in Iraq before it resumed bombing missions.