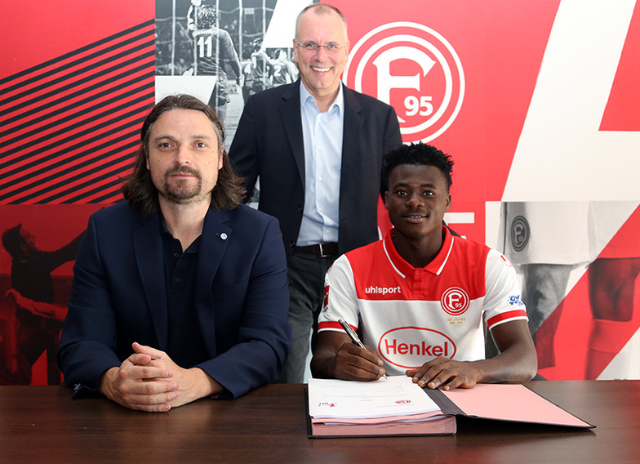 Ghanaian teenager Kelvin Ofori has joined German Bundesliga side Fortuna Dusseldorf on a three-year deal after impressing on trial.

The 18-year-old of Right to Dream Academy fame becomes the third Ghanaian at Fortuna after Bernard Tekpetey and Nana Ampomah who both sealed moves to the club earlier this summer.

“The 18-year-old offensive talent from Ghana has signed a contract until 2022 and will hence play with the No. 14 at the back of his jersey.”

Ofori’s highlight during his trial period was finding the back of the net in a 2-1 pre-season triumph over Belgian side Anderlecht.

“I am very pleased to have signed my first professional contract with such a traditional club as Fortuna Dusseldorf,” said the teenager.

“The Bundesliga is one of the best leagues in the world. I want to learn a lot here as a young player and develop myself step by step.

“The team and the whole club have helped me a lot in the first few weeks and I cannot wait to play in front of the great fans.”

Ofori could make his competitive debut for Dusseldorf on Saturday when the Flingeraner face Villingen in the German Cup.

“Kelvin Ofori is a great talent in Ghana and we are very happy that he has chosen Fortuna,” club board member Lutz Pfannenstiel remarked.

“He has a great technique and his pace makes him hard to defend.

“We are convinced that he can develop as best as possible with us.”

Ofori’s Bundesliga bow could come on August 17 when Dusseldorf play away to Werder Bremen on matchday one.