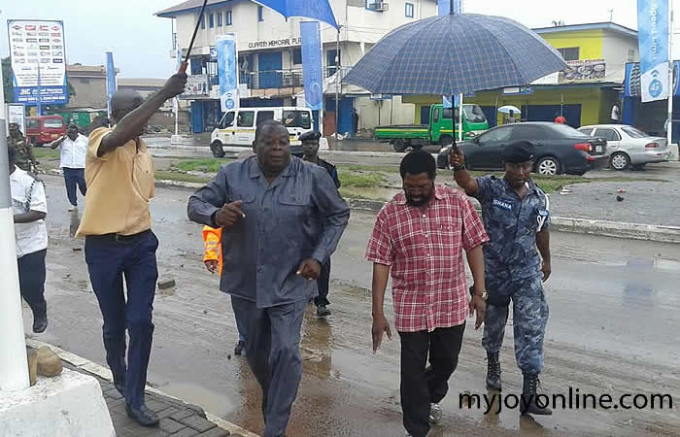 A former Executive Director of the Danquah Institute is blaming Wednesday's twin fire and flood disaster which claimed over 150 lives on the Chief Executive of the Accra Metropolitan Assembly, Alfred Oko Vanderpuije.

According to Gabby Asare Otchere Darko the tendency to always blame attitudinal behavior of Ghanaians for the floods provides a cheap escape for those whose responsibility it is to ensure that floods do not happen and even if they do its impact would not be as disastrous as what happened on Wednesday night.

Chronicling the major floods that have hit Ghana in the past, the New Patriotic Party member said it was quite evident that the month of June is noted for a lot of rain and authorities ought to have taken precautionary measures.

He said instead of planning and preparing for the floods, the Accra Mayor was busy receiving cheap honours and organising needless conferences in a city prone to floods and in a month susceptible with floods.

"In June you ought to be focusing on desilting the gutters not to organise conferences," he stated.

"Floods happen all the time because nobody takes responsibility for it," he indicated, adding in France when a similar disastrous floods claimed hundreds of lives, the Mayor was jailed for four years; in Brazil, in Russia the Mayors were sacked for similar disasters but what do we see in Ghana? Our Mayor will come and speak and give empty assurances.

One of the numerous congratulatory bill boards of the Mayor

"It is more a matter of failed leadership than attitude," he argued. In any case whose responsibility is it to shape the attitudes of the people? he asked.

"We miss it when we talk about attitude of Ghanaians," he added.

In January 2013 the president cut the sod for the Conti Project for the building of a better drainage system which would ensure that the impact of floods are minimised.

One year six months after the sod was cut, Asare Otchere Darko read a report in which the president was directing the Finance Minister to release funds for the construction of the drainage system.

What happened to that directive. Why did it take six months after the sod was cut for the president to issue that directive. Were the funds released by the Finance Minister, Asare Otchere asked.

Editor-in-Chief of the Crusading Guide newspaper Kweku Baako Jnr was convinced leadership had to take a bigger chunk of the responsibility but was quick to add that poor attitude from Ghanaians was also to blame for the disaster.

He questioned what happened to the loan approved by Parliament for construct the drainage system in Accra.

He said if government was unable to access the loan, it should have informed Ghanaians about it than to keep quiet for another floods to hit the capital.

A heavy rainstorm on Wednesday night left Accra submerged and left in its wake a disaster of great proportions. In a midst of the floods came an even more disastrous fire incident at a Goil Filling station at the Kwame Nkrumah Circle in Accra which claimed many lives.

The president has announced three days of mourning for the departed souls and has provided 50 million cedis to help the disaster victims.