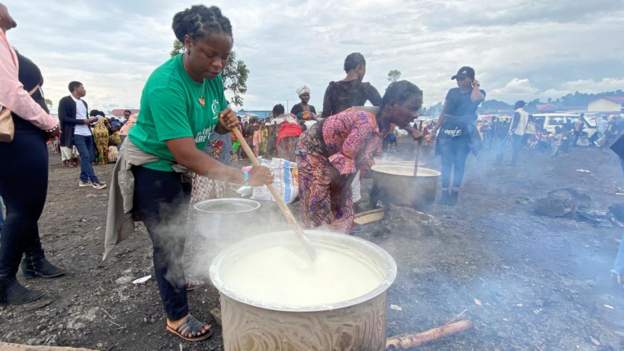 At least 250,000 people have been forced from their homes in the recent fighting

Kenya’s former leader, Uhuru Kenyatta, and Rwandan President Paul Kagame have agreed on the need for a ceasefire in the east of the Democratic Republic of Congo and for rebels to withdraw.

Mr Kenyatta – who is acting as a mediator to try to stop the conflict – has just returned from North Kivu where the M23 rebel group has launched several offensives this year displacing more than a quarter of a million people.

In public, President Kagame has always denied backing the M23 in eastern Congo.

But according to a statement from Mr Kenyatta’s office, the Rwandan leader has now agreed to use his influence to get the rebels to cease fire and withdraw from recently captured areas.

This week the conflict has escalated with the Congolese military attacking M23 positions using fighter jets and tanks.

This international push for a ceasefire brings some hope.

Much will depend on the outcome of regional peace talks which are due to begin in Kenya on Monday.

Years of fighting in eastern Congo have been fueled by the thirst for the region’s minerals.

DISCLAIMER: The Views, Comments, Opinions, Contributions and Statements made by Readers and Contributors on this platform do not necessarily represent the views or policy of Multimedia Group Limited.
Tags:
DR Congo
Paul Kagame