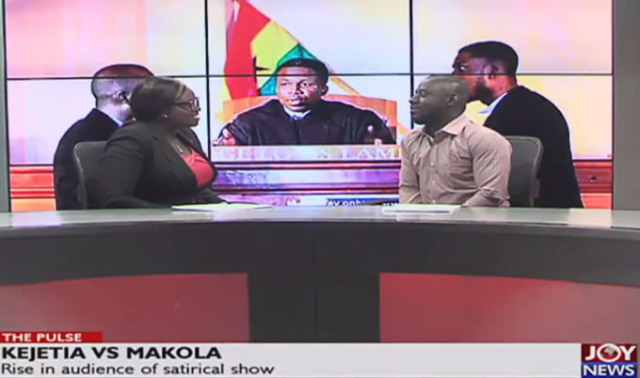 It may be impossible to shake out of our minds that, Richmond Xavier Amoakoh is anything beyond the TV character, lawyer Ntikatakyie Bombay Isaiah Exchoirester, in the series KejetiaVsMakola.

The satirical character has fixed into Ghanaian minds, a weird, funny and English-deficient lawyer cast in the popular linguistic weakness of Ashantis.

'My crient', 'this maen', and the competitively popular one 'distin' exaggerate the struggle of an Ashanti man trying to 'flow' in the English language.

These words are now the dominant lingo on social media when you want to throw in some humour.

He said it is an adoption of the Twi word 'eyi', a stand-in expression, when you are trying and struggling to recall something.

But comedy means a lot to him, he said stressing it's his passion. "mine is to bring laughter to the world". Richmond said he started acting at the University of Ghana's School of Performing Arts from 2007 to 2011.

After his time there he met Louis Lamis, the producer of the show who also plays the role of a satirical judge.

"I saw his vision. He knew where he was going so we came together. He is a man of vision" he praised the inspiration behind the show.

Richmond explained his role as lawyer Nti is to throws up a different imagery of the respected profession. He is cast as a lawyer who doesn't prepare for court and constantly loses his cases.

"We felt that it should be somebody who is different from the Makola lawyer. Colorful shirt who wears gloves".

It is intended to get the audience to ask "who is this?…which lawyer wears gloves" he explained to host Gifty Andoh-Appiah and told her, he has all types of gloves – football, doctors and gyms.

His goal to " create believable roles, fill them and portray them" has worked. Nobody believes Richmond can speak good English and the actor is now a victim of his stereotype.

Makola vs Kejetia is a hit. Broadcast on Joy News Prime after taking off in the studios of Luv FM in Ashanti Regional Capital, Kumasi, Richmond confirmed he is now a celebrity but said it even in a way that creates doubt about the seriousness of this claim.

"It feels very good. In fact, when I am walking around people see me and come and take pictures", Richmond Xavier Amoakoh said.

Producer 'judge' Louis Lamis joined in the conversation through the phone lines. He said the traction the show is getting poses the question of sustainability.

"When I hear a good comment [and] that is what comes to my mind".

Theatre is a heavily under-funded enterprise despite its great potential as demonstrated by the master playwright Uncle Ebo Whyte.

"Everything we do, you have to raise funds yourself… gather some from friends", he revealed some of the show's challenges.

But Louis Lamis won't be weighed down by some of these challenges. If Ghanaians have bought into it, then his team has to "keep thinking".

He said as long as social issues exist, there are raw materials for creating content. He said there is also room for the characters to grow and expressed gratitude for the patronage.

He says he has many other ideas for comedy.

Kejetia Vs Makola, is a satiric series which airs every Saturday and Sunday 5:30 pm on Joy Prime on MultiTV.