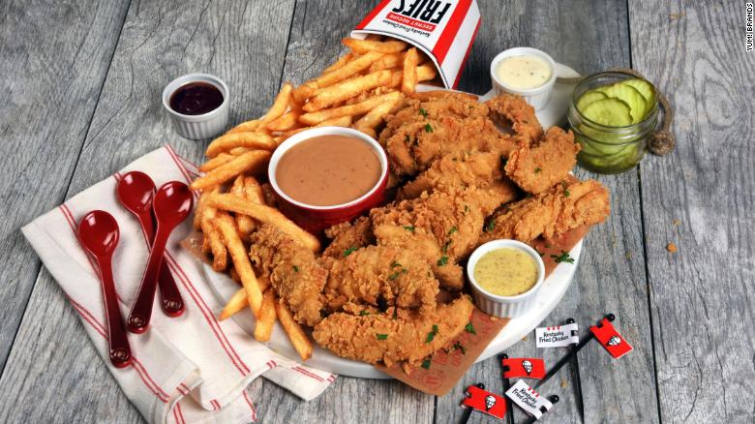 Kentucky Fried Chicken is replacing its “Finger Lickin’ Good” sauce with a new name and recipe, just a few weeks after it paused using the slogan.

The new “KFC Sauce” hits US restaurants Monday, featuring a “sweeter, tangier mix with a kiss of smokiness.” KFC said it tested 50 iterations of the recipe before settling on this one, which was in development before the pandemic.

The chicken chain has leveraged the concept of a pandemic-fueled slogan change into a marketing campaign. It began in August, when KFC announced it was temporarily pausing its 64-year-old slogan because it “doesn’t feel quite right” in light of health guidelines urging people to wash hands and not touch their faces in order to help stop the spread of coronavirus.

KFC played up the “pause,” blurring out the slogan featured on old billboards and signs in a cheeky ad released on its YouTube page. Like most fast food places, KFC has used quirky, tongue-in-cheek and sometimes-hokey marketing ploys to bring customers into their stores.

Fast food is a zero-loyalty business with razor-thin margins, so any bump in customers is a major win. Past self-effacing marketing novelties from KFC include chicken-scented clogs, chicken-scented yule logs and “finger-lickin’ good” chicken-flavoured edible nail polish.

Also similar to other quick-serve chains, KFC temporarily closed its dining rooms in March and encouraged customers to order via drive-thrus or delivery. It also installed Plexiglas counter-top shields between employees and customers, required workers to wear masks and implemented health screenings before shifts.

Lockdowns in many areas led to absolutely horrendous foot traffic at restaurants for several months, but KFC’s sales have bounced back sharply in recent months as people are craving indulgences during a particularly stressful time in history.

KFC’s new signature sauce is the newest item on the menu — along with revamped recipes for the “core” dipping sauces of the ranch, honey BBQ, honey mustard and hot sauce — but it’s only the latest.

KFC, which is owned by Yum! (YUM) Brands, recently tested a premium chicken sandwich in an effort to better compete with Popeye’s and Chick-fil-a.

The “KFC Chicken Sandwich” has a 20% larger chicken filet, thicker pickles and a new bun. The chain also permanently added a new french fry recipe to its menu in July.