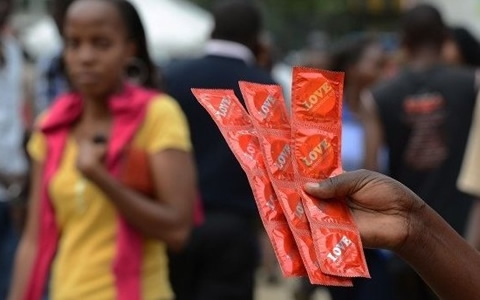 A Kenyan businesswoman has launched a condom delivery service to help tackle Aids, saying many people are too embarrassed to buy them.

Faith Ndiwa told the BBC she had the idea after some of her friends died.

"Most of them died of Aids because they shied off buying condoms," she said.

The condoms are usually delivered by motorbike to beat Nairobi's notorious traffic jams but on Valentine's Day, two limousines decorated with red flowers were used for some customers.

Ms Ndiwa says she has already has about 4,000 clients – men and women – after starting her business two weeks ago, ahead of Friday's official launch.

She says weekends are the busiest days for her company of 15 employees.

A packet of three condoms sells for $3.5 (£2), which includes delivery across the capital, Nairobi. The service also works in the towns of Mombasa, Kisumu and Eldoret.

"It is time we beat this culture of being afraid, as it will help us save millions if we can practise safe sex," she told the BBC.

The BBC's Emmanuel Igunza says free condoms are supposed to be available in all public toilets, hospitals and health clinics in Kenya but they have often run out.

He says sex is still a taboo subject in the country, and many people are reluctant to buy condoms openly in case others think they are sexually promiscuous.

On Thursday, the National Aids Council distributed over a million condoms in Nairobi in a campaign to promote safe sex.

But the prevalence rates have dropped from 7.2% to 5.6% over the past five years.