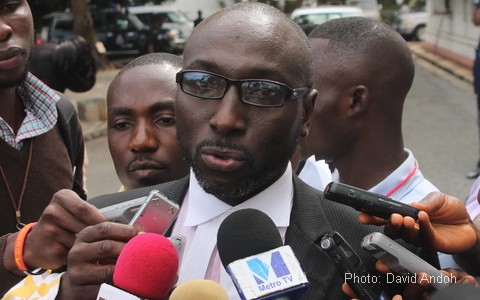 A lawyer for the NDC, Abraham Amaliba has lauded Ghana's judiciary for overseeing the historic election petition so well enough to attract the applause of Kenyans, who also endured a similar trial but with deadly consequences.

The election petition was a controversial Supreme Court challenge against the declaration of President John Mahama as the winner of the 2012 elections.

Amaliba made the submission when Ghana observed one year of the Election Petition Friday. IMANI Ghana, a local think-tank held a ceremony to critically appraise the landmark political trial and glean lessons from the process.

According to him, a Kenyan TV crew told him how Kenyans lauded Ghana's process, especially, for giving ample opportunity to the challengers known as Petitioners to make their case.

In two countries, Ghana and Kenya, the opposition parties challenged the election of sitting presidents after Electoral authorities declared the incumbents, winners of controversial elections in 2012.

Kenya's Supreme Court upheld Uhuru Kenyatta's election as president, rejecting challenges to the vote. Outside the courthouse itself, police used tear gas to chase away people protesting the ruling.

Two people died and 11 were hurt as Odinga supporters clashed with police in his western stronghold of Kisumu.

In Ghana, there was peace. No casualty, no deaths after the famous judgement was delivered on the 29th August, 2014.

Abraham Amaliba, who was also spokesperson for the NDC during the eight-month long hearing was full of praise for Ghana's judiciary.

"Let's not condemn entirely the process we adopted," Amaliba counselled.

Lead counsel for the Petitioners, Philip Addison had expressed frustration at the lack of electoral reforms, a year after some Justices of the Supreme Court recommended it in their verdict.

“One year down the line, we are still where we started from. We have the same team there being as recalcitrant as ever. Afari Gyan [EC Chairman] does not listen to anybody,” he observed.

But Amaliba believed that though Ghana's judiciary was not as well equipped as Kenya's, the process was well carried out.

The election petition which was carried live on national television for the first time, he said, made "everybody virtually a lawyer in his bedroom."

He also added that the election petition aided a "healing process for the nation" after the 2012 presidential election nearly plunged the country into chaos.

Several peace campaigns were waged in an effort to get passionate partisan members of the two political parties, the New Patriotic Party (NPP) and the National Democratic Congress (NDC) to accept the verdict.