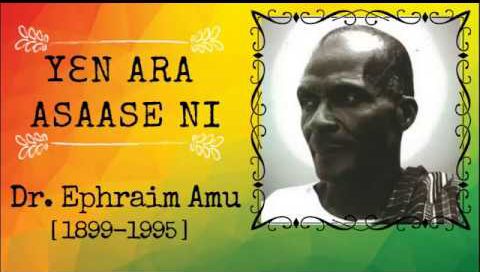 Ephraim Amu translated his own famous patriotic song from the original Ewe to Akuapem Twi. If someone else had done the translation, it would not be accepted as a true rendition of the original. But it was the poet himself who translated a text he wrote in his first language into a second language he had learned and mastered well.

The question can then be asked: why did Amu make such changes in the text many of which are not warranted musically? In a sense, he is the only one who can answer that question. But if in analysing a text, we agree with Roland Barthes that the author is dead and has no sovereignty over his creation, we can attempt to find our own answers.

Did the bard take the opportunity of translation to improve on his original Ewe text? Did he find words in the second language that he thought better expressed what he wanted to say in the original language? Or was he just enamoured of those Twi words that he found beautiful? Which version did he think was better? It is said that Amu did not care for the other language translations (Ga and Dagbani) and was attached to his own creations in Ewe and Twi.

There is another angle to this that complicates the situation further. Amu wrote his original text in his native Peki dialect. He had written the song for the school children of his village at the request of a teacher to be sung on Empire Day.

Without his authorisation, someone had rendered the dialect version into some form of “standard” Ewe and published it in a textbook. This became the Ewe version as we know it today. Did Amu like that standardisation or did he acquiesce reluctantly once it was published knowing that his Peki dialect is not the one spoken by most Ewes?

When he was doing the Twi translation two years after he had completed his composition, was he reading from his Peki text or from the “standard” Ewe text? Or from none of these?

The Twi version looks more like a rewriting of the original Peki text than a translation. If he regarded this as the final revision of ongoing work, then this Twi text may have been his preferred version. But he could not be rid of the Ewe text which was the one he had set to music. He would come to love them both.

A simple way of seeing how different the two texts are is to look at the English translations of both. My translations here are very literal in order to stay as close as possible to the vernacular texts. I will limit myself to the first stanza and the refrain. I will also use the nearest English letters for the vernacular ones that many websites will not display correctly.

“Miade nyigba lolo la” in Ewe is rendered in Twi as “Yen ara y’asaase ni”. The Ewe is properly translated into English as “This, our beloved homeland” which is not what the Twi says: “This is our own land”!

Amu’s original formulation means something more than just a piece of land that we own (Twi) or a homeland that we love (“standard” Ewe). Amu is actually addressing the land that gives birth to you. He specifically refers to the land as the “place of one’s birth” – a sentiment that is lost in the other translations.

In the original text, it is the land that owns us because it gave birth to us. We, the people, are the objects! In the Twi translation, the land is objectified and we, rather, become the subjects that own (possess) the land.

The second line in Ewe, “Enu wonye woafo asia”, is actually a rhetorical question that is asking if the homeland referred to in the previous line is a thing to be toyed with. The Twi rendition is “Eye abo den den de ma yen” – “it is a most precious thing for us”.

The next line in Ewe is “Mia togbuiwo tso wofe agbe gble de ta xoe na mi”. This says our grandfathers expended their lives to obtain it (the homeland) for us. The Twi is: “Mogya a nananom hwie gu, Nya de to ho ma yen”.

It essentially means the same thing but expresses it differently. The Ewe does not mention blood which seems to be the most important word in the Twi translation – blood is life.

This point is pertinent as the lady who designed our national flag at independence is said to have included red to represent blood because of this line. Had she used the original Ewe, her mind may not have readily gone to red as representing the blood our forebears shed in the struggle. Amu’s dialect text says it differently: “It is the elders who have used their lives to purchase this land for us.”

“Edo nye kpliwo ha dzi be miawo miato sinu”. The first part of this line is faithfully translated into Twi as “Aduru me ne wo nso so” (it is now the turn of me and you, too). But the second part diverges. The Ewe says “we should do our utmost (for this homeland)” whereas the Twi says we should add something (to what our ancestors achieved) – “Se yebeye bi atoa so”.

Perhaps the most difficult lines come next.

The critical word here is the first, “nuveve nyanya”, which Amu rendered as “nimdee ntraso”. The second Ewe word, “didodo”, means the shirking of responsibility to someone else (often used in a domestic setting). But what does the Twi equivalent, “nkoto-kranne”, mean? The last word in the line is exactly what it is in both languages – seeking only one’s own welfare.

“Nuveve nyanya” is not an expression common to all the variants of Ewe. It may be used to describe someone who claims that his particular knowledge of something is the right one and the one that should prevail or that he is the only one who knows that thing.

Some people say the word simply means selfishness. In the Twi equivalent, Amu may be talking of people who make claims to knowledge that they do not actually possess. It is suggestive of the trickster genius of Ananse.

These three evils, the standard Ewe text says, have spoiled (interfered in) our progress (march forward) and destroyed our land!

But what does it say in Twi?

Have eaten negatively into our lives and brought down our love for our land.

It is interesting to see what others, and Amu himself, has done to his original Peki text in this line. In his native dialect, he had written that these evils “have distorted our progress and destroyed our beloved homeland so much”.

The “so much” that ends the line in both Ewe texts, is missing in the Twi text. Incidentally, this term “ale gbegbe” is the title of one of Amu’s most beautiful Ewe choral compositions based on John 3:16 – For God so loved the world… (Elabe Mawu lo xexea me ale gbegbe…)

Reading Amu’s Twi line back into the equivalent Peki line, one wonders if the poet is saying in Ewe that the three evils have destroyed our love for our land or that they have destroyed our land which we love (so much)? The Twi is clear that it is the people’s love of the land that has gone down.

The Ewe word “gble” is appropriate to describe the destruction of a nation but hard to describe a love that has gone sour. Moreover, you do not cease to love your homeland because some of your fellow citizens are behaving badly. The love of nation remains through thick and thin – a sentiment that is reinforced in the last line of the Peki refrain.

The refrain presents other problems.

The Ewe is a direct address to the nation:

The way you are, that is the way you will always be!

The Twi rendition is more passive:

Here, I dare suggest, that Amu may have found the Twi line better than the Ewe one. It is easier to understand whereas the Ewe line may be prone to different interpretations or difficult to grasp especially for the non-Peki Ewe speaker.

Amu’s Ewe word here is the same as the Twi word “asaase”. This may have informed his choice of that word in the first line of the Twi text. Both “anyigba” and “asaase” can be used for a piece of land and also for a nation.

Using “oman” in the refrain of the Twi text may have been an improvement on the Peki text. This change was not necessary for the standard Ewe text since “denyigba” specifically refers to a nation and cannot be misconstrued for anything else.

If Amu had shown greater fidelity to his own original Ewe text in his translation to Twi, this song will not be called “Yen ara y’asaase ni”. It will not be called “Miade nyigba lolo la” in Ewe either. It will bear his original Peki title with its greater emphasis on the homeland as the place that gave birth to you.

It is to be noted that Amu’s text does not mention God, any country by name, or refer to the sovereign of any nation. The song was, after all, to counter the colonial anthem, God Save the King. In this sense, Amu produced a text that is applicable to every African country that was under the yoke of colonialism.

It can be translated into any African language and will be relevant to that country. The three evils that Amu identifies in the 1920s as destroying our nation are still with us today. The one thing he does not mention (at least not directly) is corruption which may not have been of particular concern in the inter-war years.

Because of the general applicability of Amu’s text (whichever version you take) to the African condition, his song is also sung in the Côte d’Ivoire (in Twi) and in Togo (in Ewe). The Togolese are not encumbered by any overbearing Twi translation and sing it in Ewe which has a slightly different feel to it than the Twi version. This Ewe version is the one I, too, sang spiritedly, with my mates in primary school in the Volta Region in the 1960s…

The lyricist of Denyigba, the 1960s track by Bela Bellow (the Togolese songstress with the hit song Rockia), worked on Amu’s Ewe text but made some notable changes. She stresses, even more than Amu’s Peki text does, the homeland as the place of one’s birth.

Bela may have been an early African feminist. She removes the patriarchal twist to the standard Ewe text that mentions only our “grandfathers” (Amu’s dialect text says “the elders” and “nananom” in his Twi version) by singing that “our grandfathers and grandmothers” did what they could do to obtain this land for you and for me.

She changes the last obscure line of the refrain of the Peki text to something simpler when she sings of the homeland: “No matter what you become for me, I will never forget you”. (Alekeke l’asike ye na nor nam ‘laa, nye ma nlo wo be ‘kpor gbede o!) It is very beautiful. And it leaves you dewy-eyed…

(Original Peki dialect text, curtesy of Misonu Amu, retrieved from the internet. The other texts and music are available online)