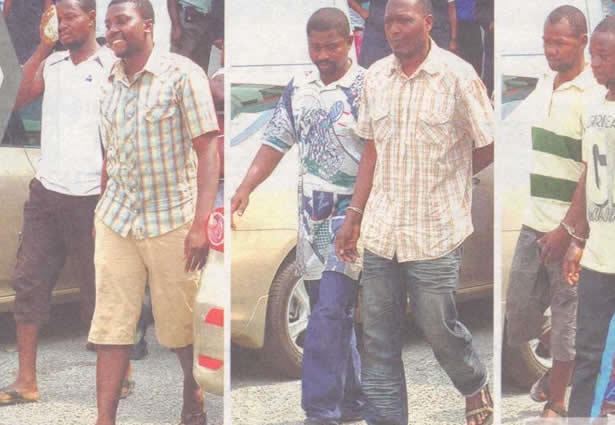 A medical officer yesterday told the M M Koforidua Circuit Court how two accused persons, armed with a gun and a machete, locked him up in a toilet and went on to “molest” his two female guests in one of the rooms at his residence.

Dr Fidelis Gligui said although he had heard the women screaming, he could not do anything to rescue them, since he had been “imprisoned” by the two armed men who were among a gang of eight suspected armed robbers who had attacked residents of the Koforidua Medical Village.

He identified the accused persons to be Samuel Kwame Akwetey, alias Agbeko, and Isaac Agormor, two of the eight men accused of masterminding the spate of armed robberies at the Medical Village and other parts of Koforidua.

The incident, according to Dr Gligui, took place at midnight on December 22, last year, during which the robbers took

away various items belonging to him and his guests, including a flat-screen television set, laptops, mobile phones and cash.

The two alleged robbers, together with six others, have been charged with different counts of conspiracy to rob and robbery, rape, unlawful entry, dishonestly receiving stolen items and abetment of crime.

The court, at its previous sitting, granted Zibo, who had been charged with dishonestly receiving stolen items, a GHct25,000 bail, with two sureties to be justified.

Recounting what happened on that day to the parked court, presided over by Mr Ebenezer Osei Darko, Dr Gligui said while sleeping in his bedroom about 11 p.m., the two armed robbers, who wore . masks, entered the bedroom after breaking the door.

He said Akwetey, who was wielding a gun, and Agormor, a machete, first entered the hall where one of his female

guests was watching television before entering the bedroom where he was stripped naked, with a gun pointed at his head.

He was asked to bring out all the money in his possession.

Agormor, Dr Gligui told the court, also threatened to cut his throat with the machete if he did not stop looking at them to be identified later and he stopped looking at the two men.

He said the robbers then locked up the lady watching television, the other lady and himself in the toilet.

According to Dr Gligui, after about half an hour, Akwetey and Agormor came for the two women and took them to a different room, from where he heard them screaming.

Dr Gligui, who could not, however, tell the court the exact ordeal the women went through, said he heard them screaming but could not do anything to rescue them because he had been “imprisoned” by the robbers.

He said when the robbers left the house, he was able to unlock the toilet and the main door to the residence, after which he approached another victim in the vicinity and the two went to lodge a complaint with the police.

Another victim, Mr Isaac Opare Addo, also told the court that at midnight on September 2, last year, two of the robbers with their faces covered and armed with a gun and a machete broke into his house at Densuagya, a suburb of Koforidua, and made away with a number of items such as mobile phones, laptops, iPads and some dollars.

He said he did whatever the robbers asked him to do and when they realised that he was sick and frightened, they gave him some water to drink and assured him that his life would be spared.

Mr Francis Polley, a Koforidua-based lawyer, stood in for Charles Awuku, who has been charged with abetment and dishonestly receiving, while Mr Wiafe Dankwa is also holding brief for Gideon Boateng, who is facing charges of dishonestly receiving stolen items and abetment.

Hearing continues on March 12, this year.