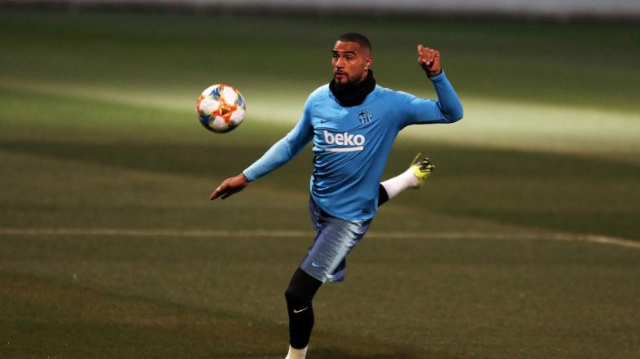 New Barcelona signing Kevin-Prince Boateng could make his debut for the club on Wednesday night after being named in the team's squad for their Copa Del Rey game with Sevilla.

Boateng was unveiled to the fans and the media on Tuesday at the Camp Nou after completing a loan deal from Italian side Sassuolo with an option to buy in the summer.

Notwithstanding, Kevin's move no matter how you look at it has become huge and talked about more than any other football story in the last 48 hours both in the international and the local media.

The discussion among some Ghanaians is whether he should be looked at again for a place in the Black Stars, especially when Ghana is keen on ending the country's long wait for an African title.

The 31-year-old is currently serving an indefinite suspension from the Black Stars after he and his close pal Sulley Muntari were expelled from the team in Brazil during the 2014 World Cup.

Kevin was sacked after being found guilty of "vulgar verbal insults targeted at coach Kwesi Appiah".

But, the recent turn of events in his club career has changed the narrative at least for some Ghanaians.

Former Black Stars player Augustine Ahinful is part of those who think the move to Barcelona should not be the basis for a return to the national team but Kevin's readiness to serve the country.

“We must first ask Kevin whether he still wants to get back into the Black Stars before we start talking about that,” he said.

“For now the benefits we as a Ghanaians will get is that Kevin is being addressed as a ‘former Black Stars player’ in every media house both locally and foreign which I believe will lift the name Ghana high.”

Black Stars coach Kwasi Appiah granted an interview in October 2018 about what will make him invite Kevin who once disrespected him.

“Kevin Prince Boateng is a Ghanaian and currently he is playing very well and if you look at our striking options we have always relied on Gyan so is about time we all check and get at least four strikers that we can always rely on,” He said

“Kevin is one of the good strikers as I have said, but in Brazil, he[Kevin] and Sulley were suspended by the FA for their unruly behaviours and I think Sulley has written a letter to apologise and looking at how Kevin is playing now, if he should write a letter to apologise, I will invite him because it is about the country not about any individual.”

Kevin has been capped 15 times by Black Stars and has scored two goals since his debut against Latvia in 2010.