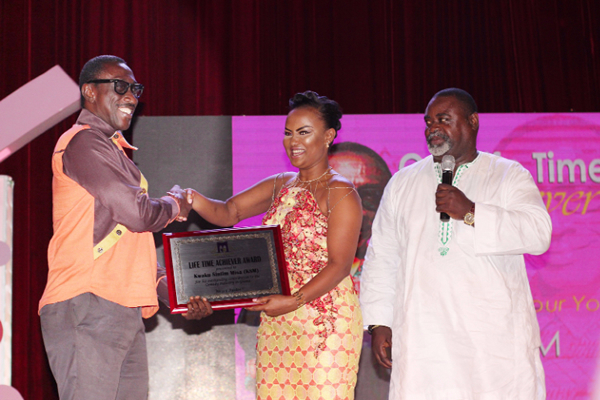 Ghana’s most celebrated standup comedian, Kwaku Sintim-Misa (KSM), was honoured with the ‘Life Time Achiever’ award at the just ended Comic Awards at the National Theatre in Accra.

The satirist, who has had a career spanning over two decades, was acknowledged for paving the way for Ghanaian comedians through his well-patronised comedy shows.

KSM is well known for writing, directing and starring in a series of one-man comedic plays, most notably ‘Saga of a Returnee’, ‘Afia Siriboe’, and ‘Politically Incorrect’.

The awards scheme initiated to recognise the efforts of personalities who continue to inject some humour into our daily lives, witnessed its first edition on Friday, September 1.

Irene Logan and Kurl Songs thrilled the audience to some musical performances as well.

Promising Comedian of the Year – Lexi

Stand-Up Comedian of the Year – DKB

Comedian of the Year – DKB