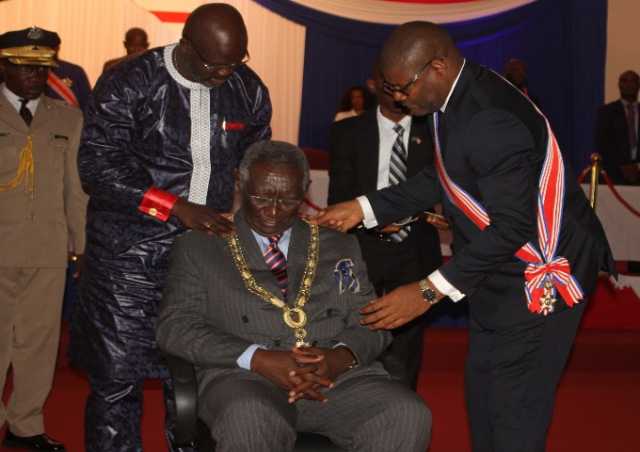 Former President John Kufuor was on Friday conferred with the highest national award of Liberia, The Collar of State – Most Venerable Order of the Pioneers, by the president George Weah.

This was part of the activities to mark the country's 171st National Flag Day.

The occasion also marked the 15th year of the signing of the Accra Accords which was the final peace document that was negotiated to bring final closure to the many years of war that ravaged the West African country.

The accord was brokered mainly under the auspices of former President Kufuor, the then-president of Ghana and chair of ECOWAS. Peace has since ensued in Liberia and there has been a peaceful and democratic change of government among opposing political parties.

Other award recipients were Frank Jerico Nagbe, former coach of the Lonestar, the Liberian National team; Dominic Vava George, former coach of Lonestar; and Gbour S. Wilson, a basketball icon, each of whom was awarded the Commander, Star of Africa (CSA).

A citation that accompanied the award to former President Kufuor and read by the Liberian president says among others that: “Under [President Kufuor’s] ingenious leadership, marked socio-economic development was recorded in Ghana; notably, pioneering of the National Health Insurance Scheme which benefited more than eleven million Ghanaians; construction and operationalization of more than two hundred hospitals and clinics; introduction of the Livelihood Empowerment Against Poverty Program (LEAP) which provided cash transfers to poor households in the country; among others.”

It continued “As president of Ghana and Chairman of the Economic Community of West African States (ECOWAS) Authority of Heads of State and Government, you oversaw Liberia[n] peace efforts and coordinated with the parties to the Liberian conflict culminating in the signing of the Comprehensive Peace Agreement, which laid the roadmap for the successful restoration of peace and stability of Liberia. The Government and people of Liberia owe you a debt of gratitude for the sustained fraternal bond of friendship you exhibited; and your continued positive role in promoting peace and development in Liberia has won for you a special place in the hearts of Liberians.”

President Kufuor on his part thanked the president, government, and people of Liberia for the recognition of his efforts to help a brother African country in times of need, especially in the critical area of peace which is a pre-requisite for national development.

He hoped that the peace that is now been enjoyed in Liberia will be a lasting one and that the president and his government will deliver the socio-economic development that Liberians are yearning for to bring smiles to their faces.

The former president and his delegation returned home to Ghana on Friday evening.