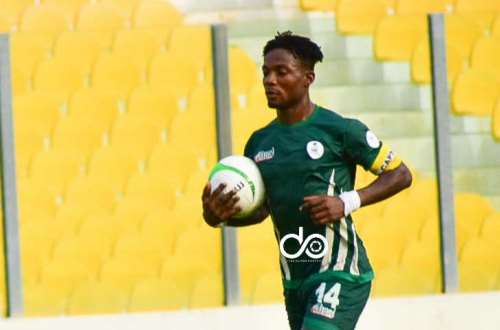 King Faisal owner Alhaji Karim Grusah has indicated that he is ready to sell Kwame Peprah to any suitor provided the price is right.

The 20-year-old was in fine form in the just ended 2020/21 season of the Ghana Premier League, scoring 12 goals in 32 appearances for the club.

The striker’s efforts were just enough to help King Faisal survive relegation as the club looks to build from there ahead of next season. In recent events, there have been rumors of Peprah being monitored by several clubs and potentially finding a new home before the commencement of the next season. Speaking to Joy Sports, Grusah said: “I am praying for Kwame to get a foreign contract, for him to get a good team so the club can also benefit.”

Asked what he will do if good offers come in for his young striker, the club owner did not hesitate in his response saying, “Insha Allah on the local and international stage we are ready.”

Speaking of surviving relegation, the club owner shared his excitement at not going down. Grusah could not hide his joy after the final game of the GPL: “I am very happy to have escaped relegation, after winning our final game I could enjoy Eid Ul Adha and the celebration of Salat.”

He went on to explain some of the challenges the club faced in the just ended season. He took his time to say that it was a difficult season for the club, as they had struggled financially, even conveying players for matches was a problem because the buses that were being used were rented.

Though they were not clear favorites to win the game, Faisal were completely happy to share the points with Liberty Professionals.

He added, “If God gives you something you have to thank him,” and he believes he did so by celebrating such a moment with his players.

King Faisal will look to avoid relegation in the forthcoming season and plan to strengthen the club financially. With a potential sale of Peprah and others they look to move on, Faisal will definitely look to take advantage of the transfer market.