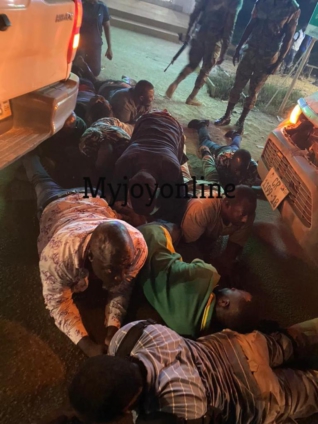 The Ministry of Lands and Natural Resources is investigating an alleged assault by some military officers on members of the Ministry’s taskforce sent to arrest illegal miners at Enchi in the Western North Region.

On Wednesday, January 19, 2022, the Deputy Minister in Charge of Mining, George Mireku Duker, directed the taskforce to report to the Western-North Regional Minister and the Police Commander to assist the security personnel in the operations.

A statement issued by the Ministry said on their way back to Accra, the taskforce identified an illegal mining site along the road around Manso-Amenfi and arrested two persons seen on the field.

The statement said the Deputy Minister in Charge of Mining was duly informed and they were advised to convey two excavators from the site to the Amenfi Central District Assembly.

With the support of the DCE, the equipment were transported to the Assembly.

On their way back to Accra, the 13-member taskforce was allegedly accosted by ten armed military personnel around Wassa Akropong, who overpowered and brutalised them leading to the hospitalization of a female member of the team.

The lady who spoke to Luv News from her hospital bed in Accra said, the military men sought to identify the leader of the team, Mr. Twum Ampofo Agyekum and a journalist who works with the taskforce.

“At a point they asked; where is Mr Agyekum and the journalist?” she added.

“When we told them we were sent by the Minister for Lands, they said they didn’t care. They asked ‘the Minister who is he?’ One of them was disgraced when they were on guard duties at Odaho,” she revealed.

Pictures of members of the taskforce, lying on the ground, taken by the military team were later displayed on social media, describing them as criminals extorting monies from miners.

In a statement signed by the Deputy Minister for Lands and Natural Resources, in charge of mining, George Mireku Duker, investigations are said to be ongoing to find out what really ensued between the military and the Taskforce.

“In an effort to fight illegal mining, popularly known as ‘galamsey’, the Ministry has established a taskforce to assist with arrests. The team has been immensely supporting the Ministry’s endeavours to clamp down illegal mining activities across the country. As part of their responsibilities, the taskforce is mandated to apprehend illegal miners on and near water bodies and hand them over to any nearby police station,” the statement added.