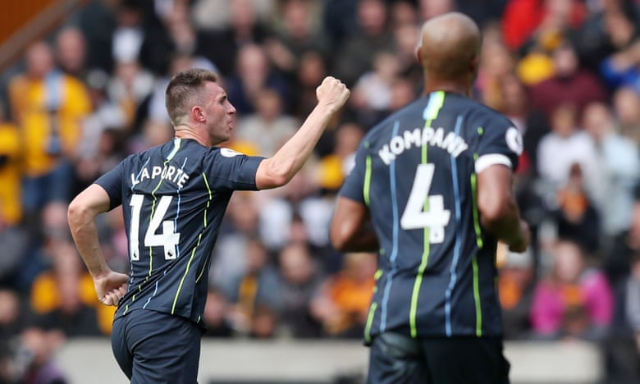 Aymeric Laporte's header rescued Manchester City a draw against newly promoted Wolves as the visitors' 100% winning start to their Premier League title defence came to an end at Molineux.

The Wolves defender had appeared to help Joao Moutinho's inswinging delivery into the net with his arm as he put the hosts ahead 12 minutes after the break.

Raul Jimenez thought he had given the hosts the lead before half-time, only to be flagged offside.

City had hit the woodwork twice in quick succession in the first half – first, Sergio Aguero fired against a post before keeper Rui Patricio tipped Raheem Sterling's long-range half-volley onto the crossbar.

Aguero then hit the bar with a free-kick in stoppage time.

A draw keeps Pep Guardiola's side top of the table for now, with the rest of the weekend's games still to come.