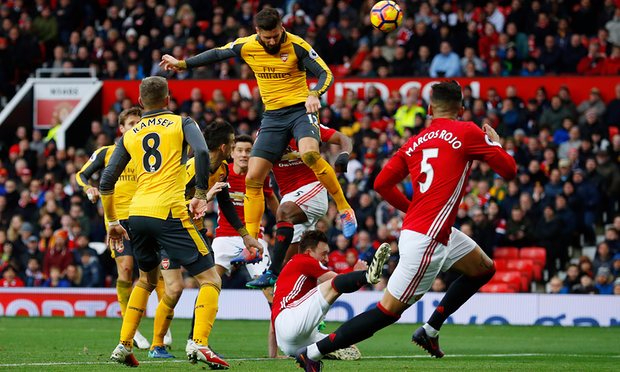 Olivier Giroud's powerful late header secured Arsenal a fortuitous draw as they rode their luck to snatch a point at Manchester United.

United have spent much of the international break in the headlines, whether for manager Jose Mourinho's treatment of Chris Smalling and Luke Shaw or captain Wayne Rooney's late-night antics when away with England.

Such issues looked to be behind them as Juan Mata gave United a deserved lead, only for substitute Giroud to head home in the 89th minute and grab Arsenal a 1-1 draw. It was their first and only attempt on target.

Mourinho will be furious after United slipped to a third successive home league draw for the first time since 1992, with the extension of his stranglehold over Arsene Wenger counting for little. Wenger has still never beaten a Mourinho side in the league.

It was a remarkable end to a match in which Arsenal were so poor, with the United boss sure to be frustrated by his side's struggles in front of goal and the decision not to award Antonio Valencia a first-half penalty.

Wenger, too, may be unhappy after Matteo Darmian avoided a second booking, although the Arsenal boss was sure to leave Old Trafford far the happier.