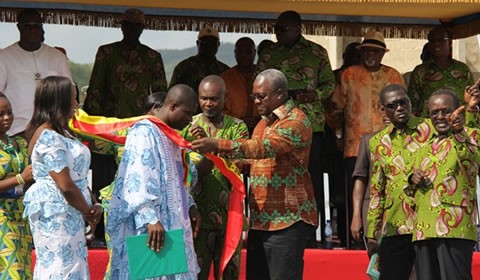 For his prize, he will have a three-bedroom fully furnished house and a pick-up vehicle.

The 28th edition of the Farmers’ Day celebrations took place on Friday 2nd November, 2012, at Abokobi in the Ga East District of Accra.

The theme for this year’s Farmers Day was: “Grow more food: strengthening farmer based organizations for market place bargaining power”.

In all, 74 farmers and fishers were honoured for their outstanding contribution to the economy.

The 1st runner up went to 51-year-old Enoch Elder Tei from the Greater Accra region, while Ellen Attiah, a 28 year-old from the Upper East region was adjudged the 2nd Runner up.

Kwamina Oboh from the central region was the National Best Fisherman. Mr. Oboh would be provided with a double cabin truck For provided by the Ministry of Food and Agriculture (MoFA).

Earlier, President John Dramani Mahama pledged the next NDC administration would prioritize agricultural modernization, which he believes holds the key to transforming the country’s economy and the pillar to Ghana’s development.

The president also promised the commitment of his administration, if re-elected, to sustain the achievements chalked by the NDC administration since it took over power in 2009.

“In the second term of our administration … our economic transformation would be hinged on agricultural modernization as a major pillar for economic advancement.”

He said the policy would be propelled by two main strategies, thus the implementation of Food and Agricultural Sector Development Policy (FASDEP) and the corresponding investment plan as detailed in government’s Medium-Term Agriculture Sector Investment Plan (METASIP).

The president further stated that the key element in the above strategies would include the transformation of the agricultural sector from a resource based to a technology based industry with emphasis on irrigation agriculture, provision of subsidies for improved seed, breeders, stocks, pesticides , fertilizers machinery and other farm inputs.

He also talked about the promotion of selected crops, as well as equitable distribution of resources. Support for farmer based organizations would also be encouraged, he said.

The president maintained that agriculture holds the key to reducing rural poverty and increasing development in the country and Africa as a whole.

He said studies and empirical evidence have shown that increase in agricultural production by 1 percent leads to a corresponding 0.72 percent reduction in rural poverty as compared to 0.04 in other sectors of the economy.