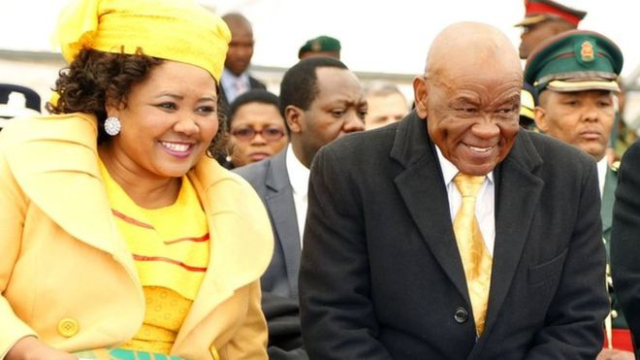 Police in Lesotho is appealing for help to trace Prime Minister Thomas Thabane’s current wife who they want to question over the 2017 murder of his then-estranged wife.

Maesaiah Thabane has not been charged, but police want to speak to her about Lipolelo Thabane’s killing, a government spokesman told the BBC.

The prime minister has also failed to answer police questions, he added.

The couple has not yet commented on a case that has caused much intrigue.

Lipolelo Thabane was shot dead two days before Mr Thabane was sworn in as prime minister of the mountain kingdom.

The women were involved in a legal battle over who should be first lady.

The courts ruled in favour of Lipolelo Thabane, who was gunned down outside her home near the capital, Maseru.

Mr Thabane described his estranged wife’s killing as “senseless” in his inaugural speech as prime minister in June 2017.

He was accompanied to the ceremony by Maesaiah Thabane. A priest married the couple about two months later at a public ceremony at a stadium in the capital, Maseru.

Mr Thabane and Lipolelo Thabane were involved in a bitter divorce battle at the time of her murder.